Let's discuss the pity party I've been throwing for myself lately, shall we?
It's been LEGENDARY.  LEH.JEN.DAIR.EEEEE.  We're talking party hats, strippers, confetti, champagne... the works.


It started out with the usual trials and tribulations of being unemployed and broke... I haven't bought anything new in like, ever.  I have to do my own nails.  I have to dye my own hair.  I have to cook dinner every freaking night because we can't afford to eat out.


Then all the fucking Christmas commercials started happening.  Thank you, Mass Consumerism, for reminding me that I can't afford to buy anyone a present this year.  (So if you don't want a handmade crocheted pot holder for Christmas, let me know now.)

In no particular order, other things that are sucking hard in my life currently would be:


My dad is terminally ill with stomach cancer and basically, will die fairly soon.


I'm not sure I WANT to go say good-bye.


I'm a horrible person because I don't want to say good-bye.


My son is being deployed to the middle east... again.


Did I mention I'm unemployed, still, going on 7 months?


I really, REALLY hate having no money.


Just because they're removing soldiers from Iraq doesn't mean they aren't relocating them to Afghanistan, and of course, that means MY kid volunteered to go.


Because he's that kind of hero.


And also?  I kind of want to shoot him in the foot myself so that he doesn't have to go.


MY FRIENDS STOPPED RESPONDING TO MY STATUS UPDATES ON FACEBOOK.


(Shocking, right?  I'll give you all a moment to process this.)

Nobody likes me.  Everybody hates me.


That's right, people... Worms were on the menu. 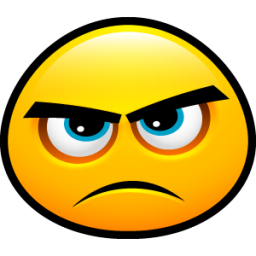 
Today, I was talking to my friend Joan and she said, "You need to get back to blogging, maybe that'll help pull you out of this..."


Her:  "You haven't posted any blogs on Facebook since the end of October."


Anyhoo, one thing led to another and as it turns out, I've been posting everything on Facebook to ONLY MYSELF.


Who can see this?


Who saw the beautiful picture of my son and daughter in law at the Marine Corps ball?


Who has been seeing my blog postings?


Really, Karma?  REALLY?  You're messing with me on FACEBOOK now?


So anyway, long story short, the party's over.


Is my theme song.