Falling Down: My Karma Through The Ages

Because I am such an evolved human... (Stop laughing.  Okay fine, I'll wait until you're finished.)

Because I am such an evolved human being, I have come to accept that the Universe is sick of my shit and rather than waiting for me to pay the piper in my next life, it's decided to stick out it's giant foot and trip me every chance it gets in THIS one, because apparently I AM that big of an asshole.

I had it coming. 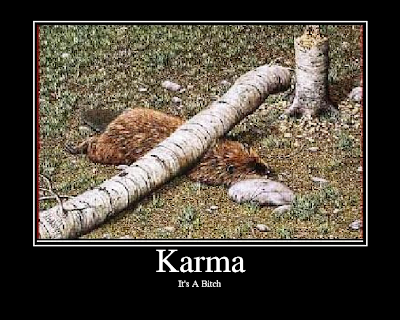 The farthest back I can trace my initial withdrawal from my Karmic Bank Account is 2nd grade, circa 1969.  Back in the Olden Times, teachers weren't quite as concerned about meeting the comfort and needs of their students as they are now.  Basically, we were taught through a combination of fear and humiliation, and if the two happened to overlap, so much the better.

It was afternoon in my 2nd grade class, and I had to pee.  Bad.  But I knew if I raised my hand and asked if I could use the bathroom, several bad things would happen:

A) All my classmates would know I needed to pee (HORRORS!)

B) My teacher would ask why I hadn't gone at recess (No good reason, other than that I didn't need to go then, you old Bitch.)

I sat at my desk, wiggling and squirming, until the teacher pointedly asked me if I needed to go to the bathroom.

Long story short, just as school was ending for the day, I could no longer hold it.  I started pee-ing  as I walked out of the classroom.  I left a little trail in my wake as I ran home, shoes sloshing, dress sticking to my wet posterior.

Miraculously, I was not detected or suspected of being the Classroom Pee-er.

Our teacher made a huge announcement the next morning about the horrible fact that someone had peed in our classroom.  She wanted names.  She wanted wet underpants.  She wanted justice, dammit. The entire class was a-buzz with speculation over who could have done such a disgusting thing.  (I quaked in my little Mary Janes and speculated my ass off right along with the rest of them.)  Rumors flew about the playground as to who we all believed to be the Room 11 Pissing Bandit.

It was unanimously determined that the Pee-er was a rather unlikable girl named Alice.  (Which is also why I've never liked the name Alice.  It makes me feel guilty.)  Alice was the large, red-haired, overweight girl with glasses who cried a lot, tattled on everyone, and always had a stuffed up nose.  (When we got to choose songs for the Friday sing-along she always picked Michael Row Your Boat Ashore, with all 200 verses.  Alice had it coming, yo.)

Alice protested loudly and sobbingly that she was not the now infamous Pants Wetter.

Not even the teacher believed her.

And then one day, not too far in the future, Alice peed her pants at recess.  (Or maybe she sat in a puddle... who knows?  Who cares?  She had wet pants.  When you're 8, that means you peed.  End of story.)

Right that very second the Universe looked up from the book it was reading, narrowed it's eyes, and muttered under it's breath, "What a little bitch!" and my destiny became set in stone.

I am leaving work on the last day of school before Christmas vacation.  My arms are loaded down with gifts, cards, my purse, and several tins of cookies.  I'm not paying attention to where I'm walking because I have to pee super bad, my pants are too tight, and I want to get home so I can put on sweatpants and power-load the cookies into my fat little face before the husband and kids get home.  I step off the curb to cross the street and promptly roll my ankle, just as I notice the large SOCCER MOM van full of kids careening towards me.  I hit the pavement face first, not letting go of my precious cargo (screw broken bones... don't let anything happen to the cookies!) and simultaneously split my pants and pee inches away from the Plymouth Voyager, the startled face of the driver and the 5 snorting and guffawing children all watching the fat lady eat crap. 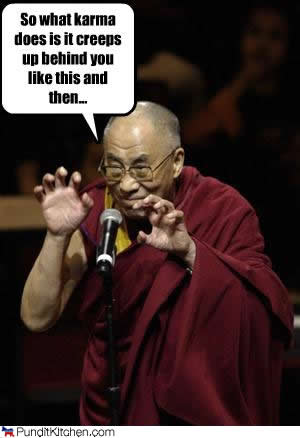 The year is now 1980, and I am riding to school with my boyfriend in his really awesome gold Camaro.  I'm smug in the knowledge that I'm small, cute, and better than people who, well... aren't.  As we are passing the park just outside the high school, a slightly obese girl crosses the street just in front of us.  She obviously felt pretty that day, as she was wearing a plaid skirt and boots.  Out of the blue she fell down, and landed HARD.  Unfortunately, she had to roll around a little bit to get herself tilted upright again.  (She kind of resembled a fat turtle that had been flipped onto it's back and needed a push to get back on it's feet.)  The startled look on her face was priceless, and did not go unappreciated.

I laughed my ass off.

No, seriously... I laughed so hard I cried.  And then, much to my own extreme amusement, told everyone I knew and laughed some more.

Flash forward to the year 2003:  My in-laws had flown out to California to visit for the first time.  We picked them up at the airport and stopped at a busy restaurant for dinner.  After we finished eating and were walking back out to the car, I felt myself lose my balance.  What resulted was one of those weird fast-forward-run-as-I'm-falling things, where you're barreling forward at the same time as you're careening down to earth, gaining momentum as you're trying to stop yourself from the inevitable crash-landing.  I ate serious pavement at the bottom of a small incline, skinning my knees and my palms, losing both of my shoes, and entertaining diners from all over the area and from out of town with  my antics.

Dan lost his shit at this spectacle, laughing and pointing and doing everything short of rolling around on the ground in his mirth.  Once the spectators realized I wasn't dead, they all chimed in.  There's probably a video somewhere on youtube called "Fat Lady Falls" detailing my rapid decent into the gutter.  Fuck you, Red Lobster patrons.  Fuck you and your kind.

I hate you, Karma.

Grocery store, circa 1995-ish:  The boys and i are shopping.  As we are toodling through the dairy aisle, one of the stock boys comes running over to assist a customer.  As he passes the eggs display, he steps on something slippery and winds up crashing head-first into hundreds of egg cartons, long skinny legs flailing behind him.

My children, who are way too much like their mother, burst out laughing.  (They are not quiet children, bless their hearts.  Nor are they subtle.)

I shoo them into another aisle as fast as I can, shushing them and glaring at them and telling them to be nice.  As we rounded the corner, I completely fell apart, laughing like a demented hyena at the poor, unfortunate stock boy and his long, skinny legs, kicking out from the egg display like a dying spider.

A thoughtful, sensitive woman who had witnessed the event pursed her lips and glared at me, as I hooted and brayed like a drunken jackass.

My children were horrified.

Flash forward to the year 2009:  Same grocery store.  Parking lot.  Raining.  I'm hurrying out with my groceries, dressed, per usual, inappropriately for the weather (or anything else, actually).  I'm wearing my super cute black high heeled fur-lined clogs.  As I step over one of those stupid idiot speed bumps in the middle of parking lot, my foot comes out of my shoe just as the other foot slides in a large puddle formed by the ridiculous placement of the afore-mentioned speed bump.  My shopping cart gets away from me as I fall slowly to the ground, screaming, "NOOOOOooooooOOOOoooooo..." in my head.  I land  on my knees like a sack of wet sand.  As I pick myself up and go back for my wayward shoe, I watch my cart slowly crash into the back of my car.