Everytime I watch Fatal Attractions on Animal Planet, I come away with only one thought in my head:

Kind of like when Steve Irwin died.... I couldn't believe that people were "shocked" by that.  Really?  The  man wrestled with crocodiles while dressed only in khaki shorts and a short sleeved khaki shirt.  (Why?  Why is that all he ever wore???).  The only "shocking" part is that he was killed by a sting ray.  Seriously.  Dude was begging to be crocodile food.

The show needs a new title:  Idiots Who Had It Coming.

Since my parents spent a lot of time dragging my sister and I into dangerous situations by holding guns to our heads and making us to kayak into the middle of fucking NOWHERE throughout the wilds of North America, we were force-fed a healthy diet of Fear and Respect of All Things Wild.  We were taken to bear safety classes, wildcat safety classes, drilled on what we would do it a moose charged us... Believe me when I say we knew our shit.

Our knowledge was put to the test one summer when we were kayaking on Lake Moline, in God Only Knows Where, Canada.  My sister and I (I was 11 or 12, she was... and still is, bwaahaahaaa... two years older) were in our own boat.  A storm kicked up white caps on the glacier fed lake and we were forced to  pull over to a remote island and wait it out (we were also given survival lessons and knew exactly how many minutes it would take us to die in a glacier fed lake.  Thanks, Mom and Dad...) so that we wouldn't capsize and promptly succumb to hypothermia (of which we knew all the signs and symptoms... happy thoughts for children!!).  As we were shivering in the woods, rain and drizzle soaking us to the skin, the lake resembling the ocean during a storm, we happened to notice giant bear footprints leading out to the shoreline.

At the exact same moment, we saw the bear in question:  It was eating a moose in the lake about 20 feet in front of us.

Until you have been up-close and personal with a bear... ANY bear  (which I have, more times than I like to think about.  Once again, THANKS, Mom and Dad!!)... you can't even begin to fathom the HUGENESS of their heads... or the deadness of their eyes.   (Just want you to get a clear visual.)

And until you've had the pleasure of watching a grizzly enjoying his lunch, you have no freaking idea how enormous and frightening those bad boys are.

My sister's plan was:  She was going to distract the bear by making a lot of noise and throwing her breakfast bar at it, while I ran into the lake and died quickly from hypothermia.

She's a giver, my sister. 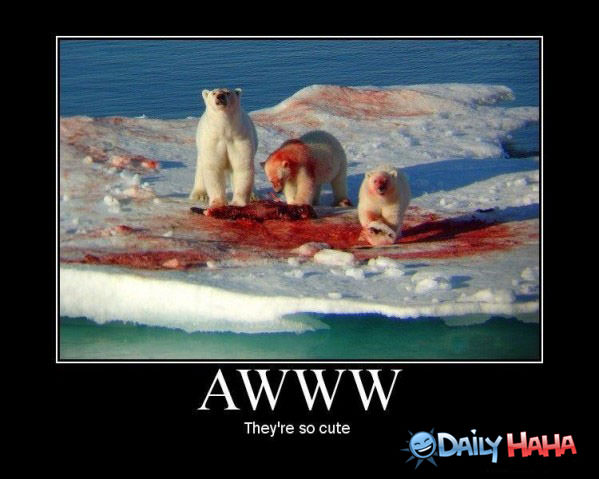 I have a theory about people who think they have a connection to wild animals:  They're stupid.

It's alllll fun and games until you become their dinner.

Most of the episodes involve either snakes or large cats.  What on earth makes a human being so cocky that they believe a snake has feelings for them?  How many different kinds of dumb can you be to honestly think that your "pet" Black Mamba isn't going to bite you?


And the thing with large cats:  I don't get it.  Yes, they're beautiful, they're elegant, they're big, they're cats.  But how pathetic is it that there are actually more tigers in captivity in the United States than there are in the wild?  (I checked my facts, yo.)  And when you're found with your head in the tiger's mouth and the rest of your body is buried for later, do you still feel like this animal is a member of your family?  Like it's your babyyyyy?  What is the last thought that goes through your head as you realize you are becoming dinner for that day?  "Damn kids..."


One episode of Fatal Attractions featured a man who owned several large cats in a remote area in Canada, which he allowed to roam freely around his property.  His excuse?  He was teaching the lion it's boundaries.  "Dude... I'm a fucking lion.  The world is my boundary."   For years, the people of the town tried to get the county (or whatever they're called in Canada) to pass laws forcing owners of exotic animals to keep them confined in a code-enforced compound.  Even after a child was mauled by one of the large cats on this man's property, the county didn't push it and the lions were free to roam at will.  (And the owner claimed it was the fault of the child for moving the wrong way.)

Eventually, the owner himself was mauled and killed by one of his own cats.  Of course.

A friend of his was quoted as saying, "He would have wanted to go that way..."

The bitch had it coming.


Anyhoo.  That's my rant for the day.  I'm going to leave you with a final thought: