Notes from the marriage bed...

*Author's note:  This isn't about sex, in case you were worried (or hopeful... whichever).  I'm pretty sure my children would prefer believing that they were each the product of a star in the east, three wisemen, a manger, and a virgin birth, so one thing I will never write about is my sex life (not that I have one... don't worry, boys, Mommy is as pure as the driven snow).


*Sidebar:  When my son Shea was around 6, one of the gross, lice infested, neighborhood mutant germ children told him about sex and "where babies come from."  Shea came to me, sobbing, and demanded to know if that was the truth.  I admitted that yes, indeed, that IS how it happens.  He looked at me with betrayal on his precious little face and demanded, "You mean you and dad did that THREE TIMES?!"


Let me share with you a typical morning in my house:


The alarm goes off at 7:00 a.m.  Dan hammers the crap out of the snooze button, wedges his backside against me, sighs contentedly, and farts.


I hold my breath and lie very still, so as not to lift the covers so that none of the gasses can escape and assault my nose.


He farts again, rendering all my efforts moot.


He pretends to be asleep.


I make a huge show out of flipping up the covers and stomping out of the bedroom, taking my freshly farted-on self into the kitchen to make coffee.


He lies there like a dead man, determined to keep up the charade of an innocent sleep-farter.


Farting is a huge bone of contention in my marriage.


I've tried to have an intelligent, adult discussion about this issue.


I get angry, he rolls his eyes and says things like, "What do you want me to do?  Hold it in?  Explode?"


He goes into detail about why  it isn't good or healthy for him to hold in his farts.  According to Dan, holding in a fart can kill you.


I tell him that so can farting on your wife.


He loudly insists that it isn't possible for him to hold in a fart.


I tell him he's full of shit.


He agrees with me and lets one rip.


He laughs.  I plot his demise.


And the battle wages on.

Farting is Dan's party trick.  As long as he has gas (which, frankly, he always does) he's ready for anything.  Want to embarrass the wife at Walmart?  Rip one in the aisle where she's shopping and hot foot it into the next aisle, leaving her encased in stink and looking guilty.  Laugh until tears pour down your face when she comes hauling ass around the corner with murder in her eye and tries to mow you down with the shopping cart.


Want to humiliate her for a hearty guffaw at the restaurant where you're having a romantic meal?  Let a silent-but-deadly one slip through your happy butt cheeks just as the waitress is bringing the appetizer and drink orders.

Say, "DANI!" really loudly and look at her pointedly as the waitress smiles politely and tries to pretend she doesn't notice.


Act contrite when she refuses to speak to you for the rest of the evening and apologize when you get home, promising to never do such a heinous thing again.

She knows you're lying through your teeth because you ate too much, are tired of arguing, and just want to go to bed so you can fart some more.

Having game night with fam?  Partner up with the little woman during the card game and fart relentlessly and repeatedly, thus killing two birds with one stone:

1.  Farting is hilarious so you get to be the life of the party (in your own mind) and crack yourself up for hours on end and

2.  Your parents are watching so there are witnesses, which  means she can't be the raving, screaming, bitch she really wants to be and she can't kill you.

And when she starts screeching like a harpy on the ride home, roll up all the windows, lock them, then fart again and laugh your ass off as she turns green and gags, because you really are a clueless bastard. 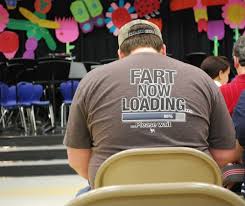 Last night, as we were lying in bed, Dan kissed me lovingly goodnight (he's really very sweet, despite all the horrible things I say about him) and as he rolled over so I could spoon him (I'm chronically cold and I need to put my icy hands on his warm belly and my frigid feet on his normal, human temperature legs so I can fall asleep at night without contracting hypothermia) he let out a long, sonorous, multi-note blast from his rectal area.  For one brief moment, I could tell he was considering faking sleep (as if he could have fallen asleep as he was rolling over), but common sense got the better of him and he went with the the apology route, complete with an explanation:  "I didn't even know that was in there... it shocked me too..."

At that precise moment, Maisy, my pug, attacked his ass.