Halloween Confidential 2: The Embarrassing Case of the Awkward Banana 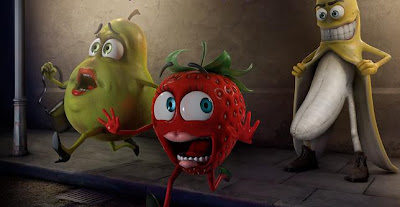 The year was 1990-ish.  We had just moved to a new town and were renting a house that was literally at the end of a dead end street.  The only thing beyond our house was the Pacific Ocean.  And a lot of sand dunes.  And cows.  And criminals.

We were 10 miles out of town and practically living in the backyard of Pelican Bay State Prison.

Long story short, we weren't expecting any trick or treaters.

I dressed up my little boys in their Ninja Turtle pajamas (I wasn't about to go spend $50 on crap costumes that they would wear for an hour, once) and drove them in to town to scam candy off of other people (because I hadn't bought any myself, since I wasn't a) home or b) expecting trick or treaters, as stated previously).

*Sidebar:  Yes, I was one of those mothers who didn't give her poor, skinny, starving, pasty-faced, "Please, sir, may I have some more?" looking children any candy.  Or Kool-Aid.  Or Soda.  Or anything that apparently makes life worth living.  On the plus side, they all grew up thin, healthy, and with all their teeth.  It's the little things, no?  So sue me.  I also made them eat their vegetables and clean their rooms.  I'll probably wind up on Jerry Springer one day with my children throwing chairs at me and screaming that I never bought them that disgusting liquid candy crap that came in a tube and made me want to hurl just by looking at it.  (Why did they want to eat that crap?  Kids are stupid, that's why.)

Anyway, we knocked over a few fairy princesses, stole their candy, toilet papered a house or two, and called it a night.  We came home, jammied up, and put the kiddos to bed.  As I was settling in to enjoy the first peace and quiet I'd had that day (and pick through their candy haul... like you don't do the same thing), I heard a knock on the door.

My first reaction was, of course, panic... Who the hell would be knocking on my door?  We had no neighbors. We didn't know anybody.  I hadn't heard of a prison outbreak, but after the fiasco with the electronic doors on the prison cells (they weren't latching... you think I'm kidding?  I'm not.  And it took them a while to realize it) I wasn't taking any chances.  I froze, willing myself to stop breathing and become invisible, because as luck would have it, anyone standing on the porch could see perfectly into the livingroom.  (Curses!!)

They knocked again and I heard a chorus of over-stimulated sugary voices scream, "TRICK OR TREAT!!!"

You've GOT to be fucking kidding me.

I couldn't pretend I wasn't there, because well... they could see me. (DAMN you, bright red Betty Boop pajamas!!  DAMN YOU TO HELL!!)

I also had absolutely nothing in my house resembling candy... other than the three plastic Halloween pumpkins I was currently rifling through looking for chocolate that I had no intention of giving away.  (Don't judge me.)

I did the only thing I could do, faced with such dire circumstances:

I grabbed the fruit bowl, opened the door, and handed each of those precious and disappointed looking children a banana.

They all stood there, silently, staring in dismay into their trick or treat bags, where the brownish, mushy bananas sat like slugs.

"Say thank you!" ordered their mother, obviously determined to force her children to be polite, no matter what.

"Thank you," they intoned, as they walked dejectedly off of my porch.

"You're welcome!" I chirped, wanting to die.

The moral of my story is that we lived in that house for two more years, during which time we never got another trick or treater, even though the following years I was completely prepared, with candy, pumpkins, decorations, the works.

I'm thinking of doing that again this year.

I do have a bowl full of apples...