Dan, whom I'd been co-habitating with for 4 years, surprised me with a romantic get-away to a cabin in Trinidad, California, a gorgeous little town on the north coast in the heart of redwood country.

(Sidebar:  To my children, who were at that time 19, 17 and 16 years old, respectively, I am perfectly well aware of the fact that you threw a party that night and drank 99% of all my liquor, then refilled the bottles with water.  Apple Pucker does not resemble watery, seriously diluted green Kool Aid, nor does vodka freeze when you put it in the freezer.  Just an FYI.)

Anyway, we arrived at the cozy little secluded cabin.  Of course the first thing I did was run to the bathroom (Hi, I'm Dani, and I pee alot) where I discovered (of course!  OF COURSE!) that I'd started my period.

I mean, why wouldn't I start my period?  It was a romantic weekend away from my kids, alone with my sexy man... Seriously, this shit practically writes itself.

(Little known fact:  The Akashic Records of my lives were used as the guideline when they wrote Murphy's Law.  Now you know.)

Dan was his usual pragmatic self when I informed him of this change in plans.  As I recall, the conversation went something like this:

Me:  *bitterly*  "I started my fucking period."

Dan:  *looking dismayed and slightly shocked*  "You DID?  AGAIN?"

(He has a hard time comprehending the once a month, every month, part of the whole menstruation thing.)

We unpacked our car, Dan poured me a glass of champagne and grabbed himself a beer, and we snuggled on the couch, blissfully listening to the wind and the sea serenading us just outside our door as if we'd never heard it before.

(Since we had only driven about 40 miles down the coast away from home, it's not like it was any different than standing on our front porch and listening to the same wind and the same sea, but still.  It felt different, since the sound of squabbling teen-agers was missing from the equation.)

I sipped my champagne while Dan chugged his beer (he's so classy) and looked soulfully into my eyes.  We smiled and snuggled and whispered sweet nothings into each other's ears, content in the knowledge that we had an entire weekend alone to do whatever we wanted (sleeping in and eating out being the top two on my list).

Then out of the silence, Dan began to speak...

Dan:  *deeply and seductively*  "Soooo, what with the tax laws changing and all, we should probably get married, huh?" 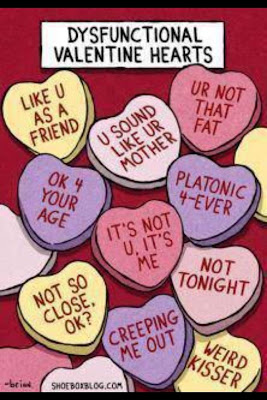 Dan:  *looking deeply into my eyes*

(My favorite answer to any question I've ever asked him, ever.  *eyeroll*)

Dan:  *sighing dramatically and getting on one knee*

Dan:  *taking my hand in his and looking into my eyes*  "This is really hard on my knees.  Okay, fine... Danielle Charlton, will you marry me?"

Okay, in my defense?  I'm a sucker for big blue eyes.

Me:   *trying really hard to contain my joy at being proposed to in such a romantic fashion*  "Yes!  Yes!  A thousand times, yes!  Yes, I'll marry you!"

(Okay, so maybe it didn't go quite like that, but I did say yes.)

The music swelled, the tide came in, the waves crashed over us... it was all very From Here to Eternity.

Suddenly, without warning, I knew with absolute certainty that I was going to hurl.

I shot up off the couch, launched myself off of Dan's head (he was still on his knees) and flew into the bathroom.

Long story short, the most romantic Valentine's Day of my life included:

Starting my period
A marriage proposal
Vomiting for 12 hours

Talk about a buzz kill.

We drove home the next morning, cutting our weekend short by about 36 hours.  I held a plastic bag in my lap and contemplated death, so horrible and guilty did I feel about ruining our weekend with my non-stop puking.

That night, after we went to bed, I was lying on my side facing away from Dan. I had my eyes closed and was so miserable that I could barely move and didn't respond when he leaned over to tell me good-night.

Thinking I was asleep, he gently kissed the back of my head and whispered, "I love you, Future Mrs. Daniel Geer..."

Oh, and also?  I started my period on my wedding day.