Another one with TMI

What the fuck is UP with these panties???

I basically spent the night tossing, turning and gyrating in a desperate attempt to situate my underwear just right so that they'd stop crawling up my butt and wedging themselves into *ahem* other areas.

As I yanked and pulled and tried to find a position that wouldn't encourage creepage, those damn panties just developed a life of their own and drove me fucking crazy all night  long.

Why the hell didn't I just take them off?

Since I really have no intelligent response to that question, I've decided to ignore it.

This, naturally, leads me to a TMI discussion about underwear choices.

(Feel free to chime in.  Or tune out.  I understand either way.)

For some reason, men seem to find the idea of a woman wearing thong underwear extremely sexy. So women, naturally, wear them.

And I've yet to figure out why, other than the benefit of cutting down on visible panty lines.   (Aka VPL, in case you've seen that before and had no clue as to what it stood for but didn't care enough or were too embarrassed to ask.  You're welcome.)

Which, in MY opinion?

Isn't a good enough reason to slice my ass in half.

I've owned a few thongs but can only wear them for about 30 minutes before they start driving me crazy.

So I begin, mentally, to weigh the pros and cons:

No one is noticing my panty line anyway because they're distracted by my hand being shoved down the back of my pants every 6 seconds to remove floss from butt-crack.

Doing deep knee bends to remove floss from butt-crack while performing a reverse reach-around is not sexy.

Let me break it down for you, in case you're a dude and are still focused on the hotness of thongs:

2.  Wedge it deeply within the confines of your ass-crack.

I decided to base my underwear choices on more utilitarian purposes rather than on what men may or may not find sexy.

Moving right along, let's discuss the option at the exact opposite end of the underwear spectrum: 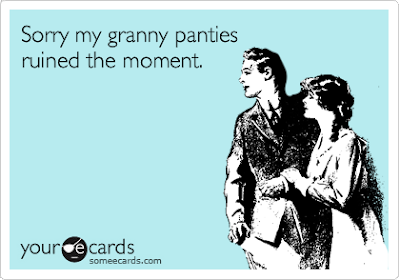 I'm not a fan of those, either.

First of all, I do not like billowing folds of cotton or nylon hanging out over the waistband of my pants.

Not that it wouldn't come in handy were I ever to be involved in a plane crash, as I'm sure they could double as a parachute and/or flotation device, but in real life?

I feel like there's just too much excess room to guarantee that everything stays where it's supposed to.

(I know, I know... now you're wondering what I've got going on that needs to be kept confined.  No, I don't have a secret penis or anything growing where it isn't supposed to.  I just mean that I like my girly bits to touch cotton, not air.)

And let's face it:  Those panties be ugly.  And huge. 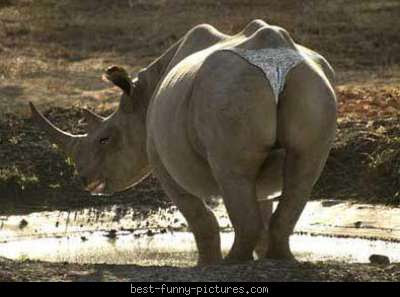 Which leads me to:

I have never been able to wrap my head around the idea of not putting on panties before I leave the house.

I would spend every waking second being hideously aware of the fact that I wasn't wearing panties.

I would probably begin all of my conversations with, "Hi, I'm Dani and I'm not wearing panties" and every one would think I was hitting on them when in reality, I would just not be able to talk about anything else because all I would be thinking about was the air blowing up my dress and the fear that at any given moment, I would fall down and be spread eagle in public without wearing any panties.

I would be afraid to sit down, stand up, walk, talk, bend over, sneeze...  (If you've had kids you understand why that might be an issue... Imagine being out and about all carefree and panty-less when suddenly you are struck with a sneezing attack and all you can do is just stand there helplessly, sneezing and piddling without any panties on.  That would be awkward.  I of course would just step over the puddle and pretend it didn't happen, but deep inside, I would know.  And sadly, so would everyone else.) 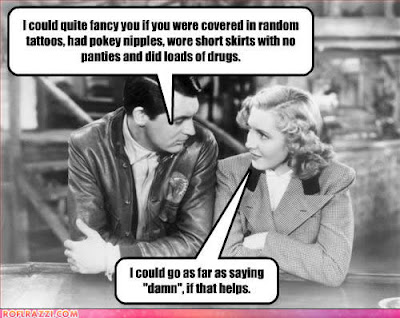 I think I'm super careful about my panty choices because of the number of times I've inadvertently tucked a skirt into the back of my underpants and went on my merry way, cluelessly mooning the world and only finding out about it hours later when becoming suddenly conscious of the back draft that shouldn't be there.

Who an I to argue with Karma?

Meanwhile, in my travels through the Google-verse this morning, I found this and thought it was hilarious.

Since it has nothing to do with my blog, I'm sticking it in as an after-thought. 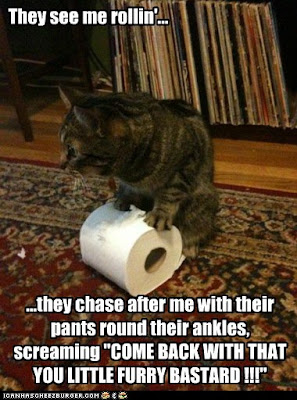