A Migraine's Journey into Day 3

There has to be someone I can blame for this, right?

If ever there were a man capable of triggering a three day migraine, it's this one.

I've spent this week sneezing my ass off, blowing my nose, sweating like there's no tomorrow, and laying awake half the night because it's too hot to sleep.

You can see how this is all Dan's fault, right?

I have horrible allergies (Dan's fault... seriously) and have spent the past few weeks sneezing like it's my JOB.  One day last week I was toodling through the grocery store when I kept catching something white floating in front of my face out of the corner of my eye.  I kept batting at it ineffectively, like it was an annoying fly, to no avail.  There it remained, blurry and ever present right before my very eyes.

When I got in my car I checked the mirror to see what was going on.

As it turns out (and trust me when I say that NO one will find this shocking IN THE LEAST) after spending the morning blowing my nose, a thin piece of toilet paper attached itself to my nose ring and was waving gaily in the breeze as I ran my ohsoverypublic errands.

God damn DAN.  Moving me to the wilds of Northern New York where hay abounds, the one damn thing I am so allergic to that it gives me asthma...

I'm beginning to think he's trying to kill me.

I had to go to the doctor on Tuesday, which just plain sucked.  I hate going to the doctor.  Hate it.  But since I only saw her once, a year ago, she informed me in no uncertain terms that if I plan on living much longer through the help of pharmaceuticals, I need to show up and let her look at me.

DAMN you, hypothyroid!!  (My grandmother's fault... but also Dan's fault, just because.)

For starters, I had to step on the scale.

The scrawny little male nurse made clucking noises as he whisked the little weight bar farther and farther up the scale, shaking his head and writing shit down.

"You've gained 13 pounds since you were here in September of last year," he informed me, looking at me accusingly as if I'd done it on purpose just to disappoint him. 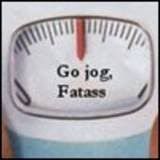 When my doctor came in, she told me, in hard core Brooklyn-ese,  that I'm too pretty to be this fat and too old to be gaining this much weight.

(Newsflash:  When  I see a doctor, I expect a lot of hand holding, sympathy, and fun drugs.  Not cold hard truth, tough love, and a slap on the wrist when I request Valium, Xanax, Vicodin, and Ambien.  Just so you know, NEW YORK.)

Here's what she actually said:

"Now about ya weight.  You ah still goahjuss but youah fillin' out a bit and plumping up, am I right?  You don't wanna be like that, not with that face.  Youah showtinin' ya life, ya know... at youah age you can't affowd to gain weight like that."

Dan, calling me after appointment:  "What did the doctor say?"

Me:  "She said I'm fat and old."  (Translation of the above Brooklyn-ese, as heard through my California ears.)


DID YOU ALL SEE THAT?

(I know... this was supposed to be about my migraine.  I'm getting to that.)

We went to a groovy little all natural foods restaurant and I ate the best freaking grilled chicken sandwich I've ever eaten, ever, in my life, and topped it off with not one, but TWO frosted sugar cookies, which are my favorite thing in the whole world.

When I woke up the next morning, I was even fatter.

And I had a headache.

Despite brushing my teeth twice, my tongue was still a brilliant shade of red, caused by the loving attention I paid to the crimson frosting on the sugar cookie(s) I devoured the night before.

Which is why I don't drink red punch, red Crystal Lite, eat red Jello or red jelly beans or red anything, actually...

Except for red frosting on crispy, buttery, homemade sugar cookies.

They were shaped like watering cans and were sooooo yummy.

Me:  "Remember when I told you that my doctor said I was fat and old so you took me out to eat?  And then you said, "Do you want dessert?" so I got two red frosted sugar cookies?"


Men are so stupid.


He's going to make it up to me tonight by plying me with Bloody Marys and indulging me in my drunken hilarity.  (I'm hilarious when I'm drinking.  HILARIOUS.  Dan is the best drunken target EVER.)

Have a groovy weekend!!

Do something I totally wouldn't do and then tell me about it!!
Posted by Unknown at 12:08 PM