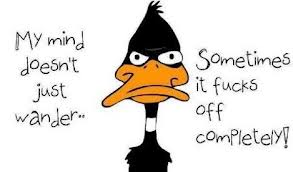 I think it's possible that I am losing my dayum mind.  According to WebMD, that bastion of excellent diagnostic capabilities, it could be early onset dementia, but more likely it's a tumah.  As attractive as the thought of a potential tumor always is, this time I'm going to lean towards senility, because the whole "it's a tumah" thing is getting a little old, WebMD.  (It's always a tumah.  Always.  One night I had to get up to pee like 400 times, which obviously made me determine I probably had diabetes, mostly because how is it possible for one small person to retain that much damn water? So I googled the symptom of "excessive peeing" and WebMD very logically diagnosed me with a possible tumor on my prostate.  As it turned out, I actually WAS retaining that much water and the peeing wasn't potentially fatal, but still.  It absolutely could have been a tumor on my prostate.)

(See how I wandered off on a tangent there?  That happens a lot.  One minute I will be talking about left and then I'm all, "Speaking of left, remember the time I went right?" and then half an hour later I'm still talking about how Basenjis can't bark and why I hate Rachael Ray.  And if you asked me what on earth that has to do with left, I could totally tell you.) 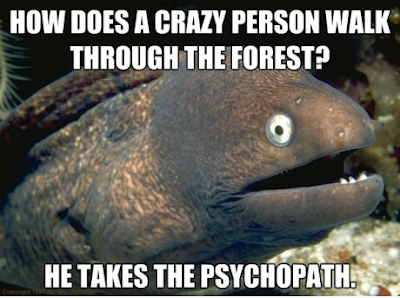 So anyway, I may or may not have given myself a brain injury this morning.  I've shared in the past that my husband snores like it's his job, yes?  He snores long, he snores hard, and he snores all freaking night long.  (Which is not nearly as sexy as it would be if I'd left out the words "he snores" in all of those scenarios.  Since I did, it's not sexy at all.  It's just annoying.)

His snoring has been a bone of contention for many, many years.  He doesn't just snore, y'all.... HE SNORES.  (Yes, I am using "y'all" totally ironically.  I never say it in real life, because if I did, I would sound stupid.  I don't do southern or redneck real well.  But I do like writing it, because it has a nice way of rounding off a sentence, yes?)  His snoring is so bad that I can't escape it. No one can.  It permeates the atmosphere and creates it's own dimension that once you've entered, you can never escape.  I can't fall asleep while it's going on, I can't sleep through it, and even if I leave the room and go downstairs and decide to sleep on the couch just to get some peace, I can still hear him.  He snores in surround sound.

It makes me the slightest bit homicidal.

If I kick and nudge him and tell him to roll over, he rolls over and continues snoring.  If I wake him up and scream at him (not that I ever would.... *cough*) he mutters an apology and within nano-seconds, continues sawing wood with the volume of a thousand rusty chainsaws.

Imagine the buzzing of a million hungry mosquitoes honing in on your ears at 3 o'clock in the morning.

Or the hum or a jillion wasps building a nest on your headboard as you lie there, paralyzed, with no means of escape.

Welcome to my nightmare.

Finally, after years of lying awake and plotting his demise (what?  did I say that?)  it came to me that I should invest in ear plugs.

(Okay, actually several people have told me several times over the past several years to buy ear plugs.  Have I mentioned that I'm a huge procrastinator?)

So simple, yet so effective.  And cheap.  Cheaper than a hit man.

Why the hell didn't you do this sooner?  you are probably asking.

At long last I was able to shut out the cacophony and drift blissfully off into slumber (with the help of wonderful pharmaceuticals and occasionally, vodka).


But alas, there is a rub.  As mentioned previously, I seem to be losing my dayum mind.

I noticed, as I was meandering downstairs to make coffee and take the dogs out, that my head seemed to be plugged.  I smacked the side of my head a few times, blew my nose, and bitched to my husband that I seem to be getting a cold.

"By sinuses seeb to be plugged," I informed him.

At this point I jammed my finger into my ear to do that thing you do when you have water in your ear or something and shoved the ear plug that I thought I had removed directly into my brain.

I could distinctly remember taking that bitch out when I woke up this morning.


No really... I DISTINCTLY REMEMBER TAKING OUT MY EAR PLUGS.

I checked the other ear... Sure enough, it wasn't there.

As I dug out the rogue ear plug with tweezers (because I had shoved it that far into my ear) I contemplated what could possibly have gone awry.  All I can come up with is that after taking out the first ear plug, I totally forgot what I was doing and didn't bother removing the other one.

How does that even happen??


How do you forget you have only removed one, when you have had two ears your entire life???


And thus begins my descent into madness.

Things that happen frequently (daily) that should have been my first clues:

7.  Did I rinse off my conditioner? 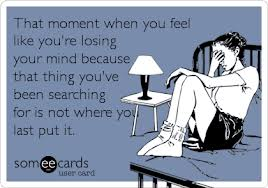 I always knew it would end this way.  It's just my luck that it's over-lapping with menopause so I won't even get to enjoy the latter.  I'll be too busy forgetting who I am and how many ears I have and where the hell did I leave my pants.

I will chase squirrels and call them "kitty!  Heeeere kitty kitty!"

Oh God.  I will wear a badly fitting wig, draw lipstick beyond my actual lips, wear bright pink blusher and cook the family parakeet for dinner.

I'm pretty sure that when I go crazy, I'll do it in a big way.

And when I die, it will be on the toilet.

(Some things are inevitable.  That is one of them.)

I'm not necessarily afraid of parting company with my sanity, I'm just afraid of  what direction it will finally go.

I want to be the kind of crazy that has a fabulous time and doesn't have a clue that I'm making a spectacle out of myself.  I want to embarrass the hell out of everyone with me and not give a damn.

As long as I'm wearing pants, I'm good with it.

(And as long as I don't randomly pee in inappropriate places because I think I'm sitting on a toilet.  That would be bad.) 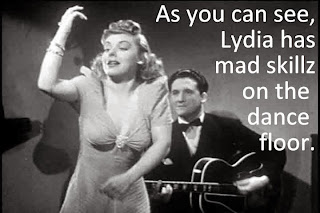