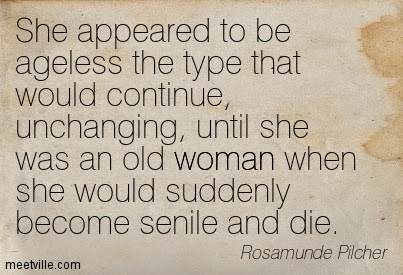 This morning I may or may not have climbed into the shower still wearing my underwear.

(I'll let you all contemplate that for a moment.)

As I was raising my right foot to step over the threshold I thought, "Wait... wait... something doesn't feel quite right."

Water began pelting my head and shoulders while I lifted the other foot to complete the transition from dirty to clean and I thought, "OHHHHhhhh... underpants!"

This is just one small thing in a long list of so-called Senior Moments (which I used to call Blonde Moments, even though I'm brunette) that have been happening lately with increasing regularity.


I tried to find the bright side...


"At least I am in the privacy of my bathroom and not standing in the check out aisle at Walmart."


"Next time I'll be at the post office and wearing my underwear on the outside of my pants and I will be forced to do the Walk Of Shame back to my car."

But yeah, the crazy is starting to rear it's ugly head more often than it probably should.  It happens so often, in fact, that I found myself googling Symptoms of Alzheimer's Disease on WebMD.  In case you aren't familiar with WebMD (in which case, I salute you) there is a section in which you can check your symptoms and see what they match up to.

There was no symptom that read "Showering in Underwear" so I moved on to the Wheel of Disease and just clicked on Alzheimer's.

I'm sure it's no shock to anyone that according to the internet, I totally have it.

(The internet is an asshole.)

And it has crossed my mind (what there is left of it) that I am no longer Of An Age where Alzheimer's is not a possibility.  In fact, if I suddenly were so afflicted, no one would say, "Oh, that poor thing... she's so young!"  Instead they would nod their heads and say, "Yep... we've seen it coming for a while now.  Her poor husband... he's so young."


Me, to Husband:  "When I am old and senile will your new, young wife take care of me until it's time for me to be put in a home?"

If I'm going to be honest, I have to admit that senility has been a long time coming for me.  I've been spacing out since late December back in '62.  Back in my infancy, I was "preoccupied" (read:  clumsy).  According to my mother, I have Not Been Paying Attention since shortly after birth.  I tripped, I fell, I banged, I cut, I dropped, I spilled, I crashed, I burned.

Long story short, it's a miracle I survived.  (I had stitches five times before I was 6.  No lie.  All my fault.  Every single time.  Why, you ask?  Because I Wasn't Paying Attention.)

Later, as a child, I was "not being challenged enough."  (Seriously... if you don't have to pay attention to your teacher in order to complete your work accurately and in a timely manner, why bother?)

Thus, a Bad Habit was born.  (Or I was born with a Bad Habit.  Either way, it didn't bode well for my future.  Thank God I was pretty.)

I skipped gleefully through school rarely paying attention, rarely taking notes (I doodled and wrote long letters to my friends, all of whom were paying attention and are therefore more successful than I am), doing my homework at the last possible second, staying up all night writing 20 page term papers that were due the next day on books that I had forgotten to check out of the library until that afternoon...

It worked for me.  Sort of.

At any rate, it worked well enough that I opted not to change it.

My catchphrase has become, "Oh shit... I forgot." My headstone will read, "Dani's not here yet.  She forgot what day it was."  (It'll be awesome.  People will wonder if they should wait for me or just leave a note saying they dropped by.  Maybe I'll just have an answering machine installed and everyone can just leave a message.  Or text.  I prefer text.  I never listen to my messages anyway.  So yeah... if you call and I don't answer, hang up and text me.  Because if you don't, I'll just see that you called, not listen to the message, and then totally forget to call you back.   Now you know.)

Come the Rapture, I'll be watching Dr. Phil and a Special Report will cut into my Regularly Scheduled Programming and I'll be all annoyed and scream at the TV, "THERE IS NO TALKING DURING DR. PHIL!" and then I'll mute it and go to the bathroom and get a diet Pepsi and come back and wonder where everyone went.  And then I'll be all, "Oh yeah... shit.  That was today, wasn't it."

Long story short, I'll wind up being Raptured in my sweat pants.

(Hopefully some of my close friends will totally see that coming and bring something along for me to change into.  Lindsay, I'm counting on you.)


Have you ever run into a person in the grocery store that seems to know you, so you are all "HI!  How ARE you?" and you chat for a while and the whole time you are thinking, "Who IZZZZZ this person???"  and then you hug and air-kiss and tell them you'll see them soon and you come home and your mother-in-law calls you and says, "Such and such a relative said they ran into you at the store today!" and you suddenly have a moment of clarity because you just saw that person at a family reunion six weeks previously? 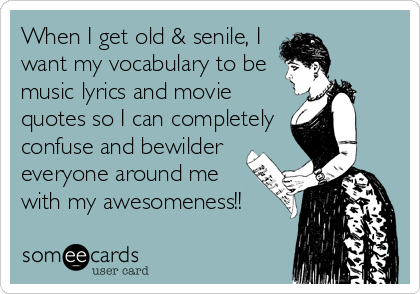 Have you ever not recognized the person who works at your local market (which only has three employees whom you see pretty much every day and know more about than you probably should because it's a small town, people talk, and you listen) because you see them somewhere outside the store where you aren't used to seeing them and your brain can't seem to wrap itself around the fact that maybe, just maybe, they go other places, too?

Have you ever climbed into the shower still wearing your underwear?

I forget to take my ear plugs out in the morning and worry that I've suddenly gone deaf, I can't remember half the time if I've put detergent into the washing machine so I double up because I really don't want to dig through all the dirty clothes to see if I put it in first, I frequently don't remember if I already washed my hair when I'm taking a shower so I wash it again just in case...

Oh... and one day last summer I only shaved one leg.  I think I got distracted or something, because I didn't get around to shaving the other one and didn't notice until I was sitting next to the pool in my bathing suit.

It was slightly awkward. If I suddenly start blogging about growing up in a small log cabin somewhere on the prairie, you'll know why.