The One With All The Gas

*Author's note:  I apologize in advance for this blog posting. 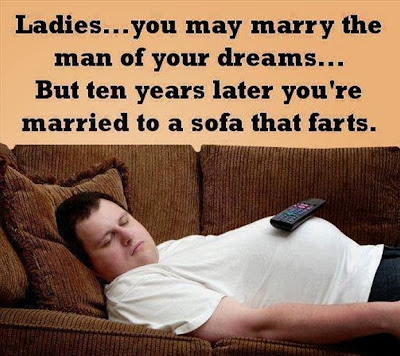 My husband Dan and I had this conversation yesterday while driving together to an appointment:


Me:  *suddenly and inexplicably being over-taken by the most heinous cloud of stink ever to encounter the human nostril*

Me:  *gasping for air and clawing frantically at the button to roll down the window*

Me:  *hanging my head out the window like a demented Shi-Tzu and sucking in oxygen*

Dan:  *taking a moment to ponder this apparently difficult question*  "I don't know... I don't think so."


This is where I went totally crazy and beat him to death with my purse.


Okay, not really.  But I did wax eloquent for the next 10-15-20 miles about how it is simply not possible to pass gas and not remember.


My soliloquy included such pearls of wisdom as "How does something come out of your ass and you not realize it??  I have never had anything come out of my ass without me being aware of it" and "Seriously?  Your ass is so independent of your brain that wind can shoot right out of it without your knowledge?  How is that even possible?"

His contributions to the conversation mostly consisted of the phrases "I don't know..." and "Could you drop it already?  It was a fart, okay?  It's not like I burned down an orphanage."


Because yeah, it was that bad.


Here's what I don't get:  How can a man who demands to know "what that smell is" every time he enters a room not smell a powerful stink bomb that has just emerged from the depths of his boiling and surging bowels?  Because that's what he does.  He will be idly sitting on the couch and suddenly will raise his head, look suspiciously around, and start sniffing the air like a blood hound on the scent.  "What's that smell?" he will demand, while the dogs and I sit quietly next to him and try not to look guilty.  Or smelly.
"I don't smell anything..." I will say, while the dogs nod their heads and hope it isn't them, because honestly?  I don't.  I smell nothing.
I surreptitiously sniff my arm pit when he isn't looking.  Nope, all good.
The dogs sniff their arm pits.  Also good.
He will continue to sniff and glare, occasionally wafting his hands to circulate the scent more efficiently.  "You don't smell that," he states.  Not a question... more of an accusation, like how is it even remotely possible that any normal human being can't smell whatever elusive aroma is tickling his nose hairs.
This can go on for hours.  If he can't ferret out the stink (which he usually can't... and I can't help because I cannot smell it) he will suddenly look at me and say, "Is it YOU?"
Because apparently I'm known for my stench.  The fuck, I say!  He will lean over, sniff me, sigh, and say, "No... you're fine."
Well thank the Lord for small favors.  It's never me.  Yet he sniffs me suspiciously every. single. time.
Me:  *insulted*  "It is never me!  Stop smelling me!"
(Doesn't everyone have to order their spouse to stop sniffing them?  No?  Just me?)
He lets me know when the dogs smell, when the house has a strange odor, when dinner seems slightly off, when my shampoo isn't right, when I change my perfume, buy him the wrong scent of deodorant...
But he can't smell his own farts.  Or recognize what's going on when one escapes from his ass.
And therein lies the mystery.
Color me skeptical.
Other conversations have gone something like this: 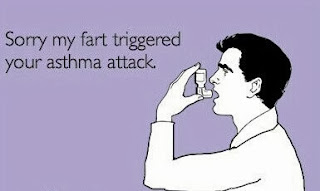 Years ago I had a Rottweiler named Coco.  She was the most amazing dog ever... fat, lazy, loving... and full of gas.  I have never before or since had a pet that farted as constantly or as noisily as Miss Coco-moco.  All day, every day, earth, air, wind and fire were shooting out of her hind quarters with alarming regularity.

Every single time she farted, she would look startled, whip her head around, and bark at rear end.

You'd think she would have eventually figured it out... like, "Oh yeah, that happened last time and it was just me again, farting..."  But she never did.  It was a huge surprise to her for the entire 10 years she spent on this earth.

That's kind of how Dan is.  For 40 years he has been releasing noxious fumes from his rectum and he still doesn't get that the noise is coming from him. 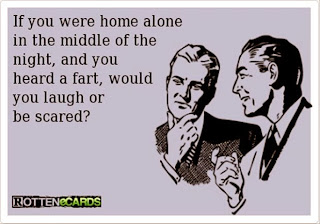 This man has more gas that the Middle East and Texas combined.  Millions of years ago, dinosaurs curled up and died in his lower intestine and have been waiting ever since to emerge from his rectum in the form of methane gas.  Meanwhile, he firmly believes that if he holds in a fart, he will immediately explode and die.  Consequently, he has no compunction about farting anywhere and everywhere the need arises.  A typical trip to the store goes like this:


Me:  *casually standing in the aisle, perusing products and comparing prices*

Dan:  *suddenly walking up behind me and shoving me down the aisle whispering "Go! Go! Go!" under his breath as we power walk through the store*

Me:  "What the..."  And then I notice the people walking down the aisle behind us, gagging and puking and clutching their throats.


I don't get it.  I really don't.  I would hold in a fart until my head blew off my shoulders before I would release it in a public forum.  But Dan?  Dan farts everywhere.  Work, home, church (if we went, that is), weddings, funerals, family gatherings... He does it so constantly and so naturally that he doesn't even know he's doing it.

The 16 year old nephew, Dorkin, is starting to follow in Uncle Dan's footsteps.  (Hard not to when your role model has a never ending green cloud clinging to the seat of his pants, not unlike Pepe Le Pew.)  He is still at the age where every time he lets one go, he practically pees himself with delight.  The worse it smells, the funnier it is, apparently.

But not to the King of Gas.


When Dorkin farts, Dan gets pissed.

"What the hell?" he will bark.  "What's wrong with you?  You just sit there and fart in front of your aunt?"

Dan:  "I never farted in front of my aunts!"


An evening of togetherness usually ends with Dan loudly ripping ass then doing his Steve Urkel impression, "Did I do that?"  He will then laugh himself off the couch while I choke and die from the fumes. 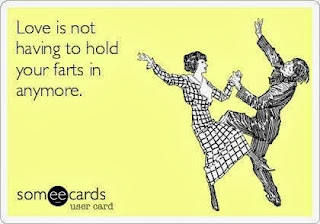