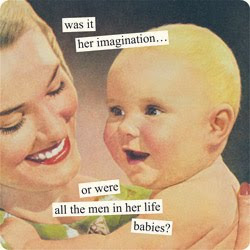 Men are whiners. You know it, I know it, even they know it. I hate to go all Militant Feminist on their asses but I'm gonna toss this out there, just for old time's sake: If it were up to them to give birth, human life on this earth would have ended a bazillion years ago, or whenever Man first made his appearance. (I'm not an anthropologist, for God's sweet sake... I'm just a woman with an opinion. So don't expect actual facts from me, mmmkay?)
Anywho, *inhale* *exhale* when DAN is sick, he becomes the World's Biggest Whiner. He lies in bed, he sleeps for hours, he coughs pathetically, and I wait on him hand and foot because he is soooo helpless. I mean, seriously helpless. I'm usually tolerant for about 24 hours but if it lasts longer than that, I'm pretty much over it and I start getting mean. But that's beside the point.
When I'M sick, he needs to be reminded constantly that I'm, well, sick. I still manage to make my own food, blow my own nose, and usually cook him dinner, while he asks me repeatedly what's wrong with me. I'm going to use yesterday as an example:
I woke up with a migraine that left me dizzy, vomiting, and in so much pain that I couldn't even speak. It was bad. BAD to the degree of Longing for Death. (And if you get migraines, you know exactly what I mean.)
Dan woke up cheerful and loud. I mean, he's usually loud, but yesterday morning he took loud to whole new levels. He was frisky and obnoxious and wayyyy too freaking perky. (I kinda sorta wanted to hurt him. True story.)
After he had grabbed me and squeezed me and bellowed "GOOD MORNING BABYYYYY!" into my ear (which I normally appreciate, really I do), I got up, staggered to the bathroom, and threw up everything I've ever eaten, ever, in my entire life (and a few things that I'm pretty sure I've never seen before. Hmmm.)
When I came back to bed I informed him in as few words as possible that I was sick, I had a migraine, and I was potentially dying.
He looked like he was listening. He nodded his head. He expressed sympathy while he flipped through the channels looking for a football game.
After listening to me puke a few more times, he got up, got dressed, and went to his nephew's football game (he helps coach. It's not like he abandoned me, he was supposed to be there. Just so you know that he may be an asshole, but he's not THAT big of an asshole).
I spent the morning dying and throwing up.
He called when the game was over and bellowed happily into my ear that they'd won the game and as a reward, he was going to let the little monsters shave his head on Tuesday after practice. (Don't get me started. Let's just pretend this is something people do every day and move on.)
I listened but wasn't capable of much speech. I grunted a few times and felt lightning bolts shooting into my head.
Dan: *soooooo damn loudly* "AND HOW ARE YOU DOING, BABY?"
Me: *softly, without opening my mouth because it hurt too bad* "Awful."
Dan: *here's where it get good* "WHY? WHAT'S WRONG?"
Seriously. He had listened to me puke, was looking right at me and nodding his head while I told him I had a migraine and was potentially going to die, and within 3 hours, had completely forgotten.
Me: *with as much annoyance as I could convey without my brain exploding* "I have a migraine and I've been throwing up all morning."
Dan: "Oh yeah. Ha ha, there can't be much left to throw up! Well, I'm gonna go have lunch with the team and then I'll be home. Love you!"
Warm fuzzies, am I right? I could feel the empathy pouring through the phone.
Flash forward an hour:
Dan comes barging through the front door, whistling. He charges into the bedroom exuding energy and good cheer. He shouts, from the doorway, "HI HONEY! I'M HOME!!! WHY ARE YOU STILL IN BED?"
Right???
Me: *without moving any part of my body for fear of puking* "Migraine. Vomit. Dying."
Dan: "Oh yeah. Sorry. Mind if I watch the game?"
Me: "Could you go get me some applesauce and 7 Up first?"
Dan: *looking wistfully at the tv* "Right now?"
Me: *snarling* "Yes, right now."
Dan: *sighing dramatically and making a big fat deal out of running to the corner store and buying me applesauce and 7 Up and missing 5 minutes of football* "Fine. *sigh* *sigh*"
Long story short, I started feeling better towards evening. I managed to get up, shower, eat some applesauce, and appreciate that with all the puking and not eating I'd done that day, I might have lost a pound. (It's the little things, yo.)
Dan spent the afternoon watching college football and happily yelling at the tv.
Which brings me to this morning.
When we woke up, Dan was oddly quiet, except for the occasional cough and deep sniffle, followed by a longggggg, longgggggg, longgggggggggggggg sigh. I knew what was coming, I really did.
Dan: *pathetically* "I didn't sleep for shit."
(GOD I hate it when he says that.)
Me: "Sorry, baby. You okay?"
Him: "My throat is scratchy and my sinuses are bothering me. *cough* *cough* *sniffle* *sigh*
Me: "Sorry! Hope you don't come down with what I had yesterday."
Wait for it....
Dan: "Why? What was wrong with you yesterday?"
Back off, girls... He's alllllll mine.
Posted by Unknown at 10:55 AM