This week the honor goes to my incredibly adorable sister in law, Taryn, with this post:

OMG - I knew it was true but now I actually see it in colour it's seriously scary - I'm really moving to FREEDOM AND JESUS oh help me!!! 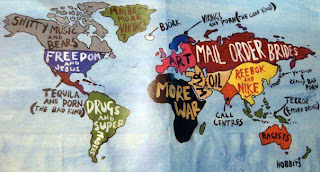 Backstory:  Taryn is married to my brother in law, Aaron.  (First let me comment on the Aaron and Taryn thang:  She also has a daughter named Sairin.  Which rhymes with Aaron and Taryn.  I expect no less because we kind of have a name thing going on in our family.  My name is Danielle and I am married to Daniel.  My father's name is also Daniel.  My ex-husband's name is Kenneth, which is also the real name of my son, Kacey.  Kacey married a girl named Danielle, which makes them Kenneth and Danielle:  The Sequel.  To wrap it all up in a neat little package and tie a sparkly bow on it, Dan's father's name is ... you guessed it... Kenneth.  At Kacey and Danielle's wedding we had Ken, Ken, and Ken, and Danielle, Danielle, and Daniel.  So Aaron pretty much had to find a girl named either Erin or Taryn.  Good job, Aaron!!!  We knew we could count on YOU!)

Anyway, here are Aaron and Taryn.  Aren't they beautiful?  I have a rule about only marrying into families of Pretty People. 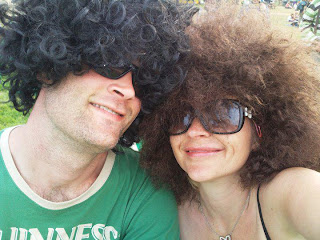 Long story short, Aaron is stationed in England with the U.S. Air Force.  While there, he met Taryn, a lovely little English lass.  Happily they lived in the historic land of the UK, which made me wildly jealous because I've ALWAYS wanted to live there.

Recently, Aaron found out he was being transferred back to the U.S.  Which wouldn't be so bad, except he's being sent to Oklahoma.

Our spunky London Lass is being sent to the Hell known as The Bible Belt, which she has dubbed "Oklahellhole."

She tried to do the British thing and keep a stiff upper lip until she heard that they don't sell liquor on Sundays.

No. Liquor. On. Sundays.

It makes my petty whining that New York won't sell it on Sundays until after noon seem silly.

No liquor on Sundays.

WTF?  It's like Footloose, only without Kevin Bacon.  Or dancing.  With booze.

We will have a standard phone date to get rip-snorting drunk every Sunday before noon, in protest.  (I'm going to assume by this fact that NASCAR doesn't happen on Sundays.)  I'm not sure if anyone's told Jesus about this, but his water into wine trick is apparently not appreciated in the southern states, where they so love to Praise His Name.   They're all, "Sorry, Jesus... you can do the loaves and the fishes, heal the lepers, walk on any body of water you can find, but there will BE no water into wine.  You can turn it into Budweiser on Saturday but on Sunday?  Coca Cola or Sweet Tea.  You got that, young man?"

Lie back, darling, and think of England...

Here's Taryn, signing her life away, blissfully unaware that one day she would be sober on Sundays and saying, "Y'all..." 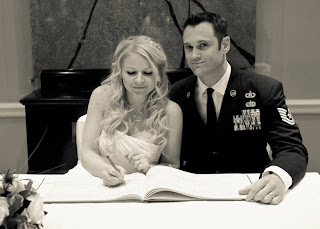 Be brave, lovey!!  Remember what I told you:  Hellfire and Damnation will only be a few states away, in New York.  And I always have booze.  Always.
Posted by Unknown at 11:38 AM