Pour some sugar on meeee....

Remember that episode of Friends when Monica loses a fake fingernail in the mini-quiches she made for her mother's dinner party?
That would totally suck, right?
Especially if you happened to be the person who bit into the piece with the fingernail?
She was faced with a moral dilemma: Serve the quiches and hope no one found the nail or... make lasagna.
I am currently facing a similar dilemma, only without the option of serving lasagna instead.
Here's what happened:
I made a big pan of bread pudding to send to work with Dan tomorrow. I put my heart and soul into that bread pudding. I cubed the bread, pealed and grated apples, sugared raisins, mixed up the egg and cream and vanilla and spices, mixed it all together, placed it lovingly into the oven and patted my Betty Crocker self on the back for a job well done.
Take that, Martha Freaking Stewart, I thought. I don't need my own magazine and a prison cell to kick some serious baking ASS.
Smug, I was. And ripe for a Karmic comeuppance.
As I was putting away my fixin's and wiping down the counter, I happened to notice...
this: 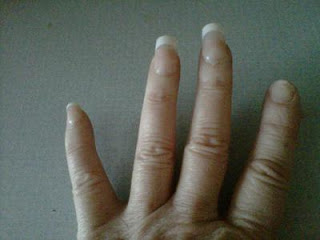 Oh. Shit.
(Yes, my middle finger is extremely crooked. That's the one I broke when I went to swat my son's dog off the kitchen table in the middle of the night many years ago and smashed my finger on the edge of the table, instead. Stupid dog.)
I know I started out this project with 10 fingernails. I know this. I KNOW THIS. So where the HELL is my 10th fingernail??
I checked the floor.
I checked the counter.
I checked behind the coffee maker, the spices, and underneath the pot holders.
I checked the sink.
I even went so far as to dig through the trash.
No fingernail.
That leaves one place. 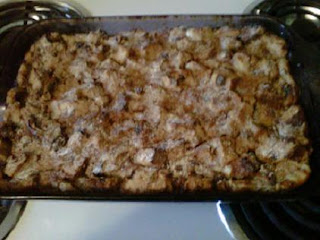 I'm thinking that by sprinkling cinnamon and sugar all over the top, it'll distract whoever bites into the fingernail. They'll be all, "Oooh! Cinnamony! Sugary! Crunchy... ? Cinnamony!"
Right?
Posted by Unknown at 4:31 PM