I wish I could say this is the first time he's made this mistake, but I would be lying. He's actually done it before.
It's been one of those weeks. I'm bitchy, bloated, crampy, achy, miserable, hormonal, whiny, unpredictable, and craving Peanut Butter Snickers (which they don't carry anywhere in this Godforsaken place. ANYWHERE).
Pretty much, between the Pity Parties and the Pissing All Over Everyone Else's Parade, I've been a busy girl this week.
Then this happened: Unfortunately, when it happened? I wasn't prepared. So I sent Dan to the store with a very explicit list AND A PHOTOGRAPH of what I wanted him to get. Because, like I said: He has made some serious errors in this area before.
He not only had the instructions of what to purchase on a list, he also had in his possession a cell phone with an equally explicit text message.
I literally left no room for error.
To recap:
1. He had a list. An explicit list.
2. He had a photograph on his phone of what to purchase.
3. He had an equally explicit text message on his phone, which he had on his person and could use to call if he had any questions.
Kotex.
No freaking wings.
I hate wings.
No brand except Kotex.
In this case, I have serious brand loyalty. There will be no deviation.
Maxi pads.
Long.
No more, no less.
And yet? He came home with this: 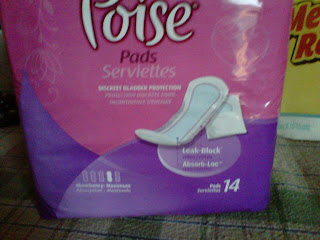 In case you're wondering, yes... those are, indeed, bladder control pads. Potty pads for pissy old ladies. It says so right on the bag. The bag also does not have the word "Kotex" anywhere on it.
Even sadder, he has done this exact same thing before. Exact. Same. Thing.
AND he did it at the Big M, where my reputation is already questionable. Now I'm a crazy lady with horrible taste in ring tones who can't tell the difference between chicken and fish and who also pees her pants.
Worst of all, I think I accidentally married a dumbass.
Because really? There is no other explanation.
Sorry, honey. I still love you. But I'm going to keep sending you to the store to buy me Kotex UNTIL YOU GET IT RIGHT.
It's the only way you're going to learn.
Posted by Unknown at 8:37 AM