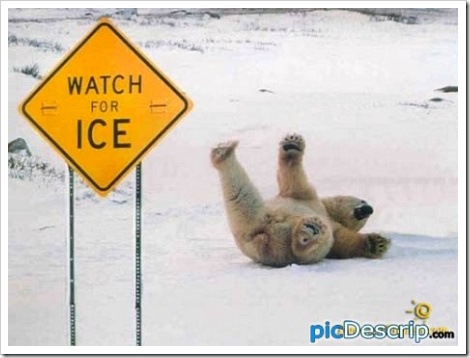 It's taken me a couple of days to blog about this because a) I'm still in pain, b) it's not quite funny yet, and c) all of the above.

It had been raining most of the morning and had finally cleared up.  I leashed up Javi and Maisy and joyfully went skipping down the stairs, ready to take a nice walk in the clean, damp air.

As we frolicked down the steps, I noticed a giant puddle blocking my exit to the street.  The doglets had wisely paused mid-frolic, hesitant to get their prissy little feet wet.

I have no such inhibitions.

I have waterproof rain boots and I'm not afraid to use them.

"Come on, you two!" I yodeled, yanking their leashes and tromping my boot-clad foot into the puddle.

This, my dear people, is where I realized I had made a drastic error in judgement.

It was here that I had a lightbulb moment one minute too late.

It was here that I realized the puddle wasn't water, but black ice.

It was here that I crashed and burned and almost died.

(The death would have been from embarrassment, fyi.)

As my foot hit the ice I performed an impromptu jazzy little dance number, arms and feet flailing like I was attempting to take flight.

I let go of the leashes and desperately grabbed at the wimpy pine trees bordering my sidewalk, hoping to find something strong enough to at least slow my descent to the frozen tundra of northern New York.  Sooner rather than later, my pile-driving ass hit the ground with a resounding thud...

Then all was silent as I lay there, sprawled on the ice with pine needles raining gently onto my head.


As I looked up (my first instinct being to see if anybody saw me fall... Because if a fat girl falls in the forest and no one is there to see it, it didn't really happen) I saw the headlights of a car slowly approaching, then creeping past as all occupants stared out the window at the shapeless, motionless blob in a bright pink sweatshirt lying bloody and bruised in the middle of an ice patch.

I could almost hear them inquiring within:

Javi bailed on me, obviously too embarrassed by my antics to even consider sticking around.  He sat by the door of the apartment building, deliberately not looking at me and pretending he had no idea who the ridiculous human lying on the cold hard ground could possibly be.

Maisy, on the other hand, took herself on a walk, seeing that I apparently wasn't going to bother.

Meanwhile, in the apartment not 10 feet from where I lay...

Finally realizing that the earth was indeed NOT going to open up and swallow me, I pushed myself up onto my hands and knees.  Obviously not learning my lesson the first time around, I grasped at the pine branches to help pull myself up.

The delicate aroma of pine filled the air as I came away with another handful of needles and no leverage.

At least my death will be piney-fresh, I thought, as another car drove slowly by.

(At least THOSE people had the decency to look away when they noticed I was watching them.)

After attempting to stand and failing miserably, I realized my only way out of this predicament was to crawl on my hands and knees back to the relative safety of the apartment building.   As nonchalantly as I could,  I dragged my sad and sorry ass across the ice, through the slush and puddles and muck and mire, to the steps of the front porch, where, equally casually, I pulled myself upright and limped up the stairs.

I've been feeling sorry for myself ever since.