And everybody was Ninja Fartingggg... 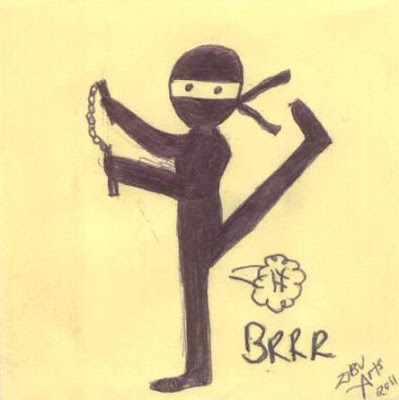 Okay, I think I'm finally ready to talk about it.

A week or so ago I posted about a telemarketer gone rogue, who was able to subdue me because I was weak from the effects of a Ninja Fart that Dan had hired to assassinate me in my sleep.

(You can refresh your memory here.)

Dan was snoring his ass off and I was lying awake, plotting his demise.  I had casually pressed a pillow against all of his air holes and was gently applying pressure when suddenly, out of the blue, a fart so powerful, so pervasive, so silent, leaped from his ass and with rapid-fire precision, proceeded to attempt to kill me without leaving so much as a mark.


I never even heard it coming.


One minute I was smothering my husband with a pillow  muffling Dan's snoring, the next I was practically levitating in a frantic effort to get air that was untainted with the foulest ass gas known to mankind.

This fart broke all laws of gravity.  It hovered in mid-air over my head (picture the Matrix, only without Keanu) and violated all rules of the time-space continuum.  (I have no idea what that means, but I can picture it in my head.)

I clawed at the air and fell out of bed, crawling towards the window croaking, "Air... air... I need air..."

I could actually feel my spirit leaving my body as I made one final, desperate lunge at the window, pushed it open, and stuck my head out in the frigid sub zero air.

I sat there breathing until icicles formed on my nose and fart crystals created a green cloud in the vicinity of Dan's ass.

When I finally climbed back in bed I was so weak and defenseless that I couldn't even kick the crap out of him with my icy little feet.  Instead, I just laid there, watching the ominous cloud of fart turn itself into the shape of a dragon and finally, finally, disappear into the atmosphere with a silent but deadly "poof."

When morning eventually dawned and Dan's alarm went off, I was still wide awake, terrified of the return of the Ninja Fart.

After Dan hit snooze three times (have I ever mentioned how much I hate that?  JUST GET OUT OF BED.  Seriously.  SERIOUSLY.  I do NOT understand the purpose of snooze.  I just don't) he finally rolled over and gave me his sleepy good morning smile.

Me:  *looking pissed off, haggard, and like I'd spent the previous 8 hours fending off Ninjas*  "I didn't."

Dan:  *looking surprised, even though I never sleep and he knows it*  "Why?"