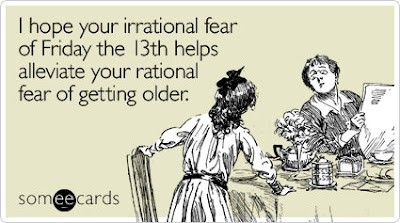 I am riddled with Irrational Fears.

I usually don't waste my time stressing over the big things... I look at the Doomsday Planners and think, "Dude... if it's all going to end in a few months do you REALLY want to be left holding all the food?  Your ass will be tortured and killed for a can of Spam!"

No thank you.  First of all, I've never eaten Spam and I don't ever want to be in a situation where I decide it's a good idea to try it.

Secondly, when I die, it certainly isn't going to be over a can of Spam.

It'll be something embarrassing, and butt-related.

When the planet explodes, I'll be happily parked on the couch watching Murder She Wrote and eating Good n Plentys.  I'll be shocked as shit, too.... trust me on that.  All the Emergency Broadcast System warnings will go unnoticed because I mute that shit until it's over.

(Seriously... who came up with that godawful noise they make, alerting you to imminent disaster?  It sounds like a freaking fax machine.  I get so effing irritated when I hear it that I don't bother paying attention to the message at hand because I'm too busy mimicking the sound and being annoyed.  Then someone calls me and screams, "Oh my God!  ARE YOU OKAY?"  And I'm all, "Whaaa...?"  And they're all, "DUDE!!  A meteor just crashed to earth and landed on your front lawn!!"  And I'm all, "Well, shit... I guess I should get dressed since the media and NASA will be showing up any minute.  I really wanted to just spend the day watching tv.  Fucking meteor.")

So yeah.... Death, distruction, Zombie Apocalypse...  I'll be the person sitting on the sidelines eating popcorn and wondering what's going on, but won't be super concerned about it because, you know, it probably doesn't involve me.  And if it does, I'll be like the captain on the Titanic going down with the ship asking, "What iceburg?"

But the really improbably, unlikely things?  THOSE are the ones that keep me awake at night.  THOSE are the things that stress me out and raise my blood pressure and give me gray hairs.

Drinking out of a soda can.

I hate to drink out of a can.  I make up all kinds of excuses for it, like "It tastes tinny" and "It makes me burp" but here's the cold hard truth of the matter:

Or a hypodermic needle.

When I need to resort to drinking from a can (because I'm dying of thirst and no one will get me a class with ice) the soda always seems... chunky.

And I obsessively shake the can, to make sure nothing is rattling around inside of it.

Going blind when the lights are turned off.

Shut up.  It is TOO possible.

When I was a little girl, I watched an episode of Lassie, that involved a blind boy and his Seeing Eye dog.

The boy was explaining to Timmy what had happened, and said (and I quote... yes, I was 5 years old but it absolutely scared the shit out of me so I remember it as if it were yesterday), "And then one night, the lights went out... and I was blind."

THE LIGHTS WENT OUT AND HE WAS BLIND.

A more rational person would recognize that as a euphemism for losing one's sight.

As a highly literal 5 year old, I was pretty sure it meant that when someone turned off the lights, he went blind.

And even now, when I turn the lights off, I suffer a brief moment of terror that blindness will strike and I will never see again.

YOU RUINED MY LIFE.

Leaving the house without my pants on.

It's never actually happened, but I always have those brief moments of panic when I step out of my car that maybe, just maybe, I'm pantsless.

I know everyone has that dream where you are back in school and you suddenly realize, while you're walking down the hall to your locker, that... *gasp*... you don't have on any pants.    In my dreams, I'm not only pantsless, I'm pantYless, too.  And I'm always distracted by trying to pull my shirt down low enough to cover my bizzness in the front and my party in the back, but the shirt is never quite long enough.

And there is no more vulnerable feeling in the world than a cool breeze on your bare backside.

Even in my dreams, I feel that breeze.

Tucking my skirt into the back of my underwear/girdle/pantyhose.

I've actually done this one enough times that it almost doesn't qualify as an "irrational" fear.  It's really quite rational, come to think of it.

I have traipsed across more college campuses than I can even count exposing my backside to the masses without a care in the world, no doubt feeling sexy and flirty due to all the people staring at me...

I have a hard time believing that this one is actually irrational, because I'm almost positive that it could happen.

Anything that flutters and flies around at night is a bat.

If a leaf falls and lands on my head (which may or may not have happened) it's a bat, and as sure as I'm sitting here, I will beat myself to death trying to get that bastard off of me.

I don't like sleeping outside or hanging out around a campfire because when you do?  You are totally leaving yourself open to potential Attack By Bat.

I don't like going outside at night because I know they're there, waiting to fly into my hair and kill me with their bat germs.

I'm afraid of windows with no screens because if they're left open, a bat could get in, wait until I'm in bed, and then kill me in my sleep.

IT COULD TOTALLY HAPPEN.

I know it's out there.

People are trying to put it into my food, sneak it onto my sandwiches, and convince me that I can't taste it.

If I think about it long enough while I'm eating a sandwich that someone else prepared at the same time another sandwich was made with mayonnaise in it, I can actually taste it, via osmosis.  The fumes absorbed into my sandwich while it was being put on the other sandwich.

I know this for a fact.

What are you afraid of? 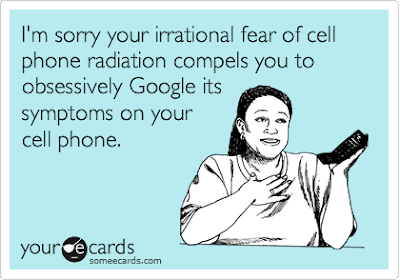