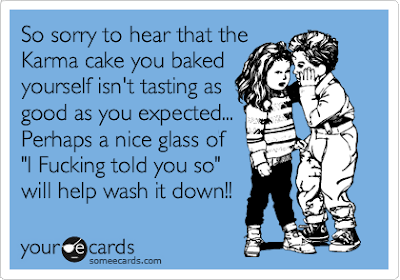 The other night, my friend Lindsay called to tell me a HILARIOUS story about her mother.

Apparently, they had gone to a restaurant that had been recommended to them by a new friend, as they just recently moved from California to Bumfuck, Wyoming.

After the cocktails arrived, Lindsay's mom announced, "I'm not feeling so good..." and then proceeded to projectile vomit right there at the table.

(I'm not going to go into as graphic of details as Lindsay did... Thanks, doll, for those images that will never leave my brain, by the way... but suffice it to say, it wasn't pretty.)

Lindsay, her baby, her mom and the booth they were sitting in were pretty well demolished.  After the mess was cleaned up (the poor, poor wait staff... omg... there is not a big enough tip in the world to make up for that) and Lindsay was packing up the baby and preparing herself to do the Walk Of Shame out of the restaurant, her mom announced, "I feel better now!  Want to stay and eat?" and then proceeded to finish her margarita.

Upon hearing this story, I literally laughed myself into a pants-wetting asthma attack.  No lie.  We howled with hilarity as Lindsay described how she now calls her mother "Chuck" and I cracked myself up to the point of no return by saying, "What's UP, Chuck?" and "Hey, Chuck... how are Ralph and Huey?"

Oh, how our gales of girlish guffaws traveled down the phone wires that night!

Oh, how we enjoyed ourselves at Lindsay's mom's expense!

Oh, how I entertained my in-laws this past weekend with this delightful little saga of vomit and embarrassment! 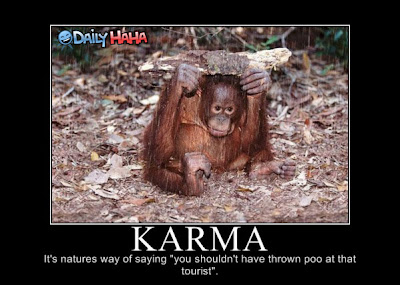 Dan and I decided to try a new restaurant last night and went to a local Mongolian Grill.  The ambiance was nice, the art work beautiful, the place smelled divine.  I was super excited because, well, Number 1:  Food was involved and Number 2:  I'd never had Mongolian Grill before.  I've never been a giant fan of Asian cuisine but everyone assured me I would love this, so hey... what's the worst thing that could happen, right? 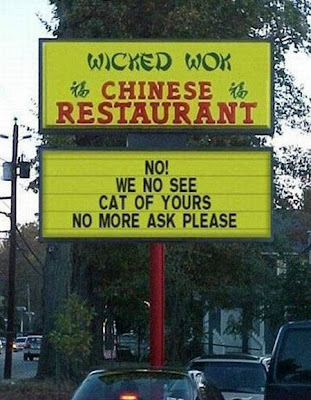 The restaurant featured a charming and well stocked buffet filled with delectable side dishes that you could add to your entree'.  Not being a fan of buffets, I was still intrigued... but cautious.

OR SO I THOUGHT.

I filled my plate with pickled pears and cucumbers (delish), averted my eyes from the squid salad (seriously... WTF???) and went a little piggy with the fresh cut fruit.

Then I noticed some stuffed clams that looked UH. MAY. ZING.

They looked like something Bobby Flay would whip up on the grill while blending up a big-ass batch of something containing tequila.

I threw caution to the wind, scooped one up, and put it on my plate.

It looked like a clam shell covered in melted cheese.

Because cheese?  Is GOD.

I love cheese with every fiber of my being.

I trotted off to our table, snarfed down the fruit and the pickled stuff, then scooped up a giant forkfull of my stuffed clam and popped it into my chubby little mouth.

Because that amazing gooey yellow stuff covering the clam wasn't The God Of The Dairy Aisle, my friends.

It wasn't the third tier of the Holy Trinity of the Father, Son, and Cheese....

THE MAYONNAISE OF DEATH. 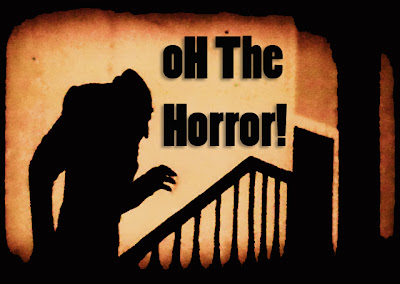 If you've ever read my blog or actually gone out for a meal with me in person, you know about my mayo phobia.

Given the choice between Death and Eating Mayo, I would choose Death.  Every. Single. Time.

I can't stand how it looks, smells... I don't even want to know it's lurking anywhere in my refrigerator.  When I order a sandwich or a burger or anything where mayo can be hidden, I put the waitstaff through the freaking Spanish Inquisition, making sure that nothing with mayo, that has been near mayo, that has ever met mayo, will be anywhere near my food.
'
And then after it arrives at my table, I go through it like a mama gorilla picking fleas off her baby's back.

Me:  *picking apart lettuce, tomato, pickles, onions*  "Is there something white on that?  Does that look like mayo?"  *removing offending piece of vegetable that may or may not have something white on it*  "I swear to God if it's mayo I'm gonna puke."  *sniffing sandwich/burger/whatever to make sure I don't smell the stank of mayonnaise*

(Makes you really wanna go out to eat with me, doesn't it.)

Dan actually paused between fork-fulls to look at me with concern and ask, "Are you okay??  What's wrong?"

A look of pure panic appeared in his eyes as he moved his plate away from the path of my potential vomit.

The people sitting on all sides of us were beginning to look a little green.  And kind of sick, themselves.

I made it through Dan finishing his food (barely) and we left the restaurant without me taking another bite.

I grabbed a handful of mints at the register and shoved them into my mouth in the car as we drove home, practicing my Lamaze breathing and thinking about raindrops on roses and whiskers on kittens.

Dan was very concerned for my well-being:  "You're not gonna puke, are you?  Because if you do, I'll puke, too.  And I'm not cleaning it out of the car."

After we arrived home, Dan began Act 2:  Reliving The Experience.

Dan:  "You should have seen your face!  HAW HAW HAW!!  I thought you were gonna lose it right there!!  You were LOUD, too! *cue imitation of me retching and gagging* I was waiting for your head to spin and pea soup to come flying out of your mouth!  HAWWWWW HAW HAW HAW HAWWWWW!  Weren't you embarrassed?"

And then I remembered...

Oh, how hard I laughed at Lindsay's mom.

Dear God, I AM LINDSAY'S MOM.

Only not as bad ass, because I didn't finish my drink or head back to the buffet.

You were quick this time, Karma... I wasn't expecting you until at least next week. 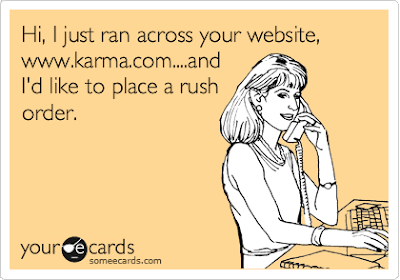