Three days in the Twilight Zone

*Author's note:  No Canadians were harmed in the writing of this blog.


Late Monday morning, I apparently entered a parallel universe that was inhabited by strange people who were determined to talk to me.

I thought the first incident was a fluke, that perhaps I'd accidentally gone to the post office at the wrong time and bumped into someone who'd never left northern New York.  (You'd be shocked at how often that happens.)

As I was waltzing in to pick up the mail I smiled brightly at the middle-aged woman who was holding the door for me.

Me:  "I moved here a year or so ago from California."

Her:   "Oh... I thought you were from Sweden or Norway or somewhere over there."

Why, because they're so known for their short, fat, brunette women?

Her:  "Because of your accent."

Of course.  That makes perfect sense.

Later that same day, I was informed on a friend's Facebook wall by a perfect stranger that I'm Facebooking wrong. 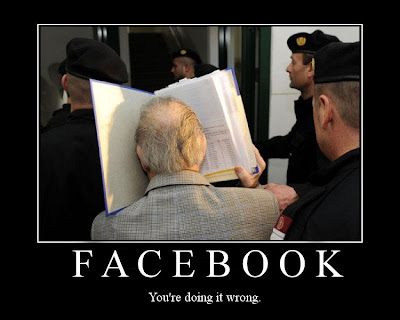 I made a simple comment on a friend's status update, which was a direct response to what he had posted.  The post was somewhat political in nature, but that's neither here nor there.

My comment was then commented upon by a person I don't know with a different political opinion than mine.

I said "I don't argue with strangers on my friend's facebook walls."

And I even included a smiley face emoticon.

Because I'm that goddamn nice.


As it turns out, in the parallel universe "I don't argue with strangers on my friend's facebook wall" translates into, "Please keep arguing with me and showing me how wrong I am and how right you are... that's exactly why I'm here."


AND I INCLUDED ANOTHER SMILEY FACE EMOTICON, JUST TO SHOW HOW NICE I AM.


As it turns out, in the Twilight Zone?  Calling someone a "right fighter" is almost exactly the same as calling them a racist.

Because after I said that, HE responded with THIS:  "Of course, attack me personally!  Might as well call me an extremist, a racist, and a bigot while you're at it like most liberals do to conservatives who have an opinion that's different from theirs."

(I feel the need to insert here that nothing in the original status update in anyway denigrated Conservatives, nor did my response denigrate Conservatives.  It was actually a discussion on how much money is spent on campaigning for political office.)

Anyway, THIS is where he told me I'm Facebooking wrong:

OHHHhhhhh... because, see, I thought Facebook was a tool for me to keep in touch with my family and friends.

Silly, SILLY me.  I had no idea it was specifically to be used as a forum for debate.

I will, indeed, send a private message next time, so as not to use social media incorrectly.

Also?  Note to self:  Right Fighter means "extremist, racist, and bigoted."  So yeah... I totally should have just called him a douchebag and let it go. 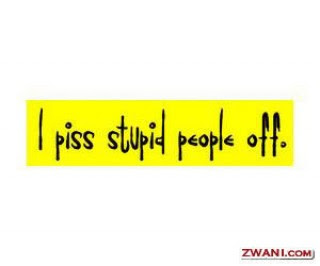 I had high hopes for Tuesday, I truly did.

Monday is usually an asshole, which would totally explain it, right?

Tuesday is like the Ugly Redheaded Stepchild of the week... so it tries super hard to please.

Tuesday would be good.

I would make Tuesday my bitch.

Tuesday had other ideas.


First?  I started my period.

Then?  Jessie, the happiest child in the universe, went from singing happy songs about her breakfast to bawling as she got on the school bus because I said something that hurt her feelings.

I have no idea what it was.

Me:  "Did Aunt Dani do something to make you sad?"


What the hell???  I would have my mouth sewn shut before I would say something to hurt that child.


After Jessie left for school, I went about the business of cleaning the house.  My mother is arriving sometime tomorrow (cue sound track from Jaws) and naturally, that means I suddenly can't stop procrastinating.

Lifting a dust cloth is soooo much wooork.  It's sooooo heavyyyyyy.

In other words, since learning my mother would be arriving, I haven't managed to clean a thing.  It's like I physically just can't do it.  Because I know she's coming.  And I know it needs to be done.  So I don't want to do it.

Suffice it to say, as I was vacuuming, I suddenly realized that the vacuum cleaner was doing more spreading the dog hair around than actually sucking it up.


Since this vacuum cleaner was specifically made to de-pet hair a house, the one damn thing it should be doing is suck up dog hair.

The one damn thing.


*cue the utterance of many, many, MANY bad words*


And that's where I once again entered Bizzaro World.

Things went smoothy until I couldn't find the polenta.

I found a shelf stocker and asked, "Do you know where I could find polenta?"

You have no idea what a freaking can of worms THAT opened.

It took FOUR PEOPLE to help locate the polenta...

AND THEY NEVER FOUND IT.


It wasn't in the Mexican food aisle (which basically is two shelves that contain Taco Bell Complete Dinner Packs and refried beans).

It wasn't in the produce section with the health food and gluten free stuff.

It wasn't in the gluten free aisle.

It wasn't even lingering amongst the canned goods.

Would you like to know where it was?  Would you?

Because I'm going to tell you where it was:

It was in the refrigerator section with the Pillsbury Pop 'N Fresh products.

It's like, since no one knew what it was, they didn't quite know where to put it.  So they put it someplace where they thought it might make sense.

Let me now share with you the conversations I had regarding polenta:

Every store person that tried to help:  "What is polenta?"

Me:  "Okay, like, you know the stuff on the outside of a tamale?  Not the husk, but the yellow stuff inside that's stuffed with meat?"

Every single store person:  "A what?"


By this time, I'd reached the point where I felt like I was speaking a foreign language so I started speaking slowly and loudly, like most Americans do when faced with people who don't habla Ingles, assuming that would help them understand.

In my quest for polenta, I'd become an Ugly American.


Me:  *shouting*  "A TA-MA-LEEEEE!  YOU KNOW, IT'S WRAPPED IN A CORN HUSK?  AND HAS POLENTA STUFFED WITH PORK OR BEEF OR CHICKEN INSIDE?  AND YOU STEAM IT?"

Every single store person:  "I don't know what that is..."

Fucking A, you guys.

Eventually, it was determined that the store carried no such thing, so I slowly cruised up and down every aisle anyway, hoping it would leap out and grab me.

Shockingly, it hadn't expired, though I admit to being a tad leery about when it may have been put there. 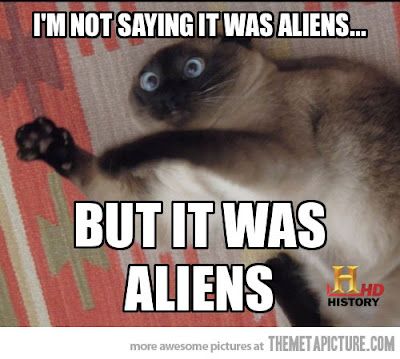 I had to repeat my entire performance when I was checking out at the register.

Fuck me hard, y'all.

Stop eating goddamn poutine, you friggin' almost Canadians.  First of all, it's disgusting, and second of all, it's just wrong.

Today brought with it the weirdest exchange I've ever had with a complete stranger.

I'm still not sure if I was complimented or insulted.

Let's break it down, shall we?

I went down to the village market (because I live in a village, don'tcha know.  Not a town, not a city, a village.  Because "town" and "city" mean totally different things on the east coast than they do in the west.  And I still don't get it.  But whatever... when in Rome, live in a village.  Accept that poutine happens.  I won't pretend to understand, but I will speak in their native tongue whenever possible.)


Anyway, back to the village market.

I picked up a few necessities of life that I didn't feel like driving into the bigger village 15 miles away to purchase, like bottled water (because I'm a snob), diet Pepsi (because I was so involved in the friggin' polenta fiasco yesterday that I totally forgot I was out), and fresh cheese curd (because, you know... it's awesome).  As I was paying, the woman behind the register, who obviously hadn't looked at a magazine since 1979, said, "How many different colors of eye shadow do you have on there?"


I have literally never been asked that question.

Her:  "Well, you don't say.  I've never seen so many colors at one time!"  At which point she emitted a smokers laugh/cough combo that nearly blew my hair back.

Me:  *smiling stupidly because I'm not sure how to communicate with people in a parallel universe*  "Oh... heh heh..."

Her:  "You have?  I don't think I've ever seen that much eyeshadow at one time!"  *cue another smokey laugh that ended with one of her lungs lying on the counter*

(I feel the need to point out here that this woman was at least 50, her huge boobs were falling out of the neckline of her stretched out t-shirt, her hair was parted down the middle and pulled back on both sides in barrettes, and she was smoking at the register.  But yeah... I'm the one that looked like a whore because I was wearing three different shades of eye shadow.) 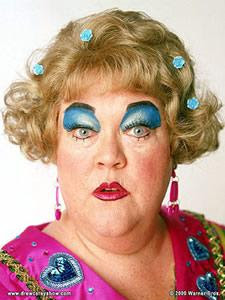 I mean, granted:  I love make-up.  I wear make-up.  I put make-up on whether I'm leaving the house or not, because I like to.  Sometimes I do dramatic things with my eyes, but usually I just blend three colors, add eyeliner and mascara, and call it good.

Today was one of those days.

Suffice it to say, I'm ready for the Mothership to return the humans to Earth and take all the Cyborgs back to Glom, or whever the hell they're from. 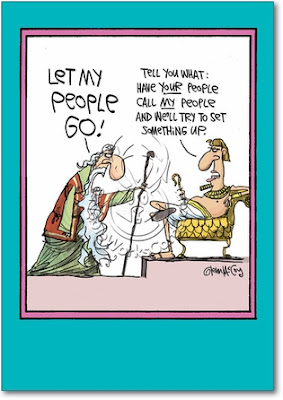