I dreamed I was being attacked by squirrels again last night.

"Again," as in "I've been dreaming about being attacked by squirrels."

The first time it happened, I was perplexed.

So perplexed, in fact, that I googled "Dreaming about being attacked by squirrels" to see if my subconscious was trying to tell me something.

"To dream of seeing squirrels denotes that a pleasant friend will soon come to visit you.  You will see advancement in your business, also.  To kill a squirrel denotes that you will be unpleasant and disliked.  To pet one signifies family joy.  To see a dog chasing one foretells disagreements and unpleasantness among friends."

So what my subconscious is telling me is that no one else in the entire world has ever dreamed of being attacked by squirrels, ever, in the entire history of time.

That leads me to one obvious conclusion:

It's a message from God.

I'm channeling Joan of Arc... I need to save the world from squirrels...

I've seen more squirrels since moving to New York than I've ever seen before in my life.  If you took every squirrel that has crossed my line of vision between 1962 and 2011, it wouldn't even come close to the number of squirrels I've seen since.  Those little bastards are everywhere.  Running across the lawn, scampering up a tree, squished flat on the side of the road, playing on top of the roof...  This is a squirrel paradise.  Gray squirrels, red squirrels, black squirrels... (No lie... black squirrels.  So freaking cute.  They look like Javi, my black Pomeranian.)  Squirrels squirrels everywhere!!

It all started over the summer.

We were sitting around a campfire (I hate campfires.  In fact, I'm not a giant fan of outside, period.) when I happened to glance over Dan's shoulder.

There was this creepy looking squirrel with enormous eyes hovering on the edge of the tree, watching us.

Because I'm an asshole, I pointed at the squirrel and announced, "Oh my GOD!  It's the chupacabra!!"

Dan,  because he's Dan, looked in the direction my finger was pointing and instantly freaked out.

"WHAT THE FUCK!!" he screamed.

After I was done laughing I said, "Seriously... what IS that?  Some freaky-ass east coast thing?"

As it turns out, it was a Flying Night Squirrel.

Long story short, the Flying Night Squirrel spent the rest of the night watching me drunkenly point at it and squeal, "CHUPACABRA!" and then fall over laughing because Dan jumped every single time.

That shit just never got old, y'all.

It was shortly after that when I had my first Attacked By Squirrels dream.

Coincidence?  I think not.

In the dream, I could actually feel the squirrel biting the crap out of my arms with it's sharp, pointed, demonic little teeth.  I was screaming and flailing and trying to bat it off of me, but it was so ferocious that I couldn't make it stop.

When I woke up, I checked my arms for bite marks.  There were none.

Me:  "I dreamed I was being attacked by a squirrel."

After that, I became a little leery of all the frolicking going on in my yard.  I was still charmed by the squirrels, but also viewed them with suspicion.  I mean, they're cute and all, but I'm pretty sure they have a dark side.

Then I dreamed again of the squirrel attacks.  Same basic dream:  I was suddenly swarmed and viciously assaulted by a snarling fuzzy rodent with a fluffy tail.

Squirrels had suddenly lost their charm.

And then, one day last week Jessie and I were taking a walk.  At some point, she pointed and said, "Aunt Dani!  Look!"

I looked in the direction her finger was pointing and there, before my very eyes, was a small red squirrel chasing a much larger grey squirrel across a leaf-covered lawn and up a tree.

I grabbed Jessie's hand and dragged her down the sidewalk muttering under my breath, "Just keep walking! Go!  Don't look back!  Whatever you do, DON'T LOOK BACK!" 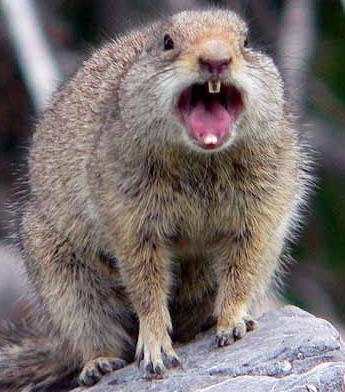 (On that same walk we also came across a tiny garter snake that literally chased us down the street, but that's neither here nor there.  I did, however, have a fabulous time regaling Dan, who is terrified of snakes to such a degree that I have seen him run screaming down the street after I pointed out a dead snake on the side of the road, with tales of Killer Garter Snakes.  He did everything but stick his fingers in his ears and sing the "La La" song when I told him how the snake tried to climb up my pant leg and grab me by the throat and strangle me.  Which may or may not have totally happened.  Meanwhile, Dan refuses to go on walks with me now.) 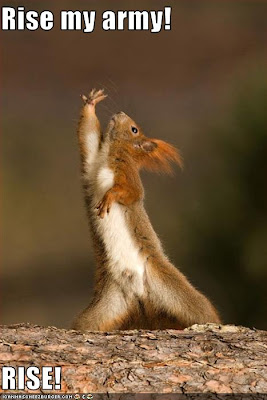 The universe is trying to communicate with me...

I need to warn the people...

There will be an uprising... 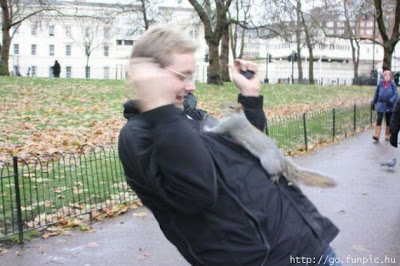 The squirrels are planning a Revolution... 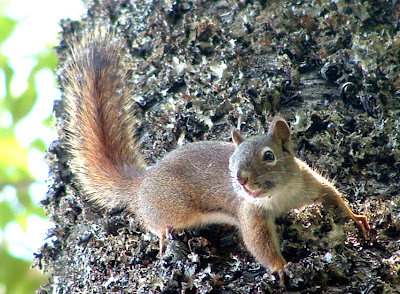 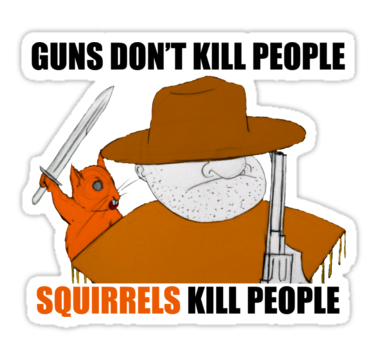 I've done all I can.

Don't say I didn't warn you.