The one with the job

*Author's note:  No NorthEasterners were injured in this blog.  Offended, possibly... but not injured.


So after almost two years of life-sucking unemployment, I finally got a J-O-B.

(Go ahead and bask in the glow of the awesomeness of my announcement... I'll wait.)

I can't tell you what it is or go into too much detail (because I was hired by the CIA) but suffice it to say, I am once again a useful member of society.

I'm sorry you didn't feel I was worthy of being hired by your store.  The State of New York, however, doesn't have your high standards and snapped my ass right up for twice the pay and 100 times the dignity.

Actually, I was hired over a month ago, but because of the highly confidential and Top Secret status of my new employment (I'm officially a Ninja), I had to have a background check (which included me having to list every.single.address I've inhabited over the past 28 years... no lie), show excessive amounts of proof that I am who I said I am and can do what I said I can do, get fingerprinted and then wait for the results of THAT to come back...

I was so stressed, y'all.

Because I'm always afraid there's something dark and heinous in my past that I don't know about.  And even though I've been fingerprinted 56430595712 times before, I'm always positive that this time, the truth will come out.

And it will be baaaaad.

I mean, as far as I know, I'm a law-abiding citizen who never even eats grapes in the produce section of the grocery store because that's stealing.  I've never been arrested (or have I??), never had to hide from the law (wait... did I??), and have only had one speeding ticket in my entire life, where I was going 57 in a 55 in Medford, Oregon, and the cop was such a dick that he made me cry. 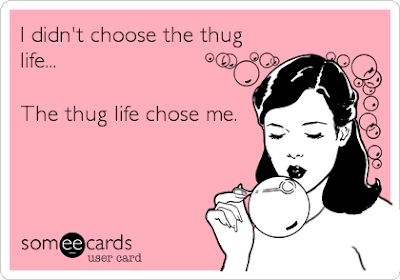 So anyway, for almost a month I worried myself sick about what my fingerprints and background check would turn up.

Did I rob a bank at gun point??

Am I a remorseless bigamist??

Did I shoot a man in Reno just to watch him die???

As it turns out, no.  I didn't do any of those things (dammit).  And if I did, they haven't found out yet, or I was clever enough not to leave prints.  Because I was cleared for hire.

Suck it, skeletons in my closet.

And my training starts tomorrow.

I'm nervous and excited.  I'm excited because I will be doing something rather new, but that I feel confident I'll be good at.  (Ninja-ing.  I will kick ASS at Ninja-ing.)

I'm nervous because what if I don't remember how to act in public??  It's been so long since I've been in a work environment... what if I accidentally say "fuck!" at an inappropriate time??  What if I lean to the side and casually eke out a fart because I forgot I'm not the only person in the room??  What if all I can talk about is the morning programming on TV Land and no one else cares what's happening on Murder She Wrote??  What if I start talking and can't stop???

These are all very legitimate concerns, let me assure you.

My former co-workers in California were used to me talking non-stop, for hours at a time.  As evidenced by my blog, I am an over-sharer and have very limited boundaries, as far as what I deem to be conversation-worthy.  (Everything.  Everything is conversation-worthy.  Except sex.  I don't talk about sex.  Except with people I know and feel comfortable with, which is pretty much everyone.  SHIT.)  But this is the east coast and people here don't find me charming.  They find me overly relaxed, overly friendly, and quite frankly, I scare them when I say hi and start talking about the weather.  My California-ness, it appears, is not appreciated in this neck of the woods.

But I don't know how to be anything else.

I always thought that the west coast/east coast stereotypes were just that... stereotypes with little basis on reality.

This may shock you, but I was wrong.

I am a fish out of water.  And I look like one.

My personality, which I personally find delightful, is considered to be slightly less than that in most northern New York circles.  Some even find me annoying.

This just in, California:  We really are pretty chill.  Maybe not to the degree that we're portrayed in Coming Of Age college movies, but chill none-the-less.  We speak more slowly, we laugh more easily, we're friendlier and let's face it, not the tight-asses our East Coast cousins may or may not be.  (Totally are.)

Not that there's anything wrong with that.

East Coasters are proper.  They are in a hurry, they are rude (they prefer "blunt" but I'm here to tell you... you're rude) and  believe the rules of the road are merely a suggestion.  They say what they mean, mean what they say, and say very little else.

It's maddening for a girl who can carry on a 2 hour conversation with absolutely anyone and only talk about superficial things, like shoes.

I can talk my ASS (and yours) off about shoes.

An example of a conversation that really happened:

The living room, watching the news with Dan and his parents.

Badly dressed, homely woman with hideous hair being interviewed about something or other that was apparently news-worthy.

Dan and his parents:  *discussing whatever the woman was being interviewed about*

Me:  "That haircut is soooo not flattering for her."

Dan and his parents:  *looking at me as if I'd sprouted another head*

Me:  "What?  Her hair is awful.  Why do people insist on wearing the same hairstyle they've had since 1982?  Don't they notice that fashion has changed and no one else in the entire freaking world still has feathered bangs?"

Dan:  "Is that seriously all you got out of that?"

Me:  *feeling uncomfortable, since even Captain Asperger is stunned by my lack of empathy*

Long story short, I don't talk about news and current events any more.

So flash backward to my job interview:

(In case you still want to be friends but also want to know what I was referring to.)

I've had several meetings with various supervisors in preparation for when I start (should I turn out not to be a felon after all) and even though they are all very nice and sweet, there is one thing missing from all of them:

The ability to not take me literally.


And this is a theme I've noticed in almost every conversation I've had with almost every person I've ever met here:


They allll take me literally.


I need to have a card printed up that I can just hand people before we begin our conversations: