The One Where I Call St Peter A Bad Name


As I was a somewhat morbid little girl, I would lie in bed at night and imagine my last moments on this earth.  Tears would roll down my cheeks as I would visualize my Death Bed scene:  Loved ones would gather around looking upon my pale and angelic visage (played in my mind by a young and exquisite Audrey Hepburn) sobbing inconsolably as I took my final and labored breaths.  At intervals I would take a brief moment out of dying to say my Last Words to each loved one in turn; words that were so filled with wisdom and meaning that they would change lives... move mountains... cause the heavens to open and the angels to sing.

My Last Words would be so epic that they would add them to the Bible.  (Most likely to Jesus's Sermon On The Mount.)

My dying would be the stuff that movies are made of.

(Along with being slightly morbid, I may or may not have also been just a teensy bit theatrical.  Don't even get me started on my funeral.)

(My dying also had a sound track, but I'll save those details for another time.)

So yeah, my lifelong death plans were shattered all to hell yesterday.

It started with an unexpected monkey wrench thrown into my already crappy day.  I've been sick for a few days.  It started Sunday night, with puking and, um, shall we say, "tummy troubles."   From there it morphed into a hideous head and chest cold that has in turn become a gnarly sinus infection and bronchitis.

Word on the street is that I feel like shit.

(The word is on the street because I put it there, in case you were wondering.)

Meanwhile, my job involves a LOT of driving, mostly on the badly kept back county roads of Northern New York.  (Of which there are many.)

I'm beginning to think my supervisor takes a somewhat perverse pleasure in sending the California girl into the wilds of the North Country.  It may or may not have something to do with me scoffing at the local "mountains" and making disparaging remarks about New York drivers not knowing how to drive on hilly, somewhat windy roads.

"You think these are mountains?"  I may or may not have sneered on one or more occasions.   "Try driving on a real mountain!"

So now I spend a ridiculous amount of time driving through tiny little mountain towns where there is no cellphone reception, no road upkeep, lots of pot holes, lots of brave yet stupid deer, and lots of big rigs with sadistic drivers.

(And the occasional twang of banjo music.)

(I also am pretty sure I saw Ned Beatty tied to a tree in his underwear once.)

In my travels along the back roads of St. Lawrence County I have hit a deer (but didn't kill it... oh God it was horrible), did over $2000 worth of damage to my car (thank you, Geico, for your prompt check delivery plan), developed a new found hatred of long haul truck drivers, and yesterday, almost died.

(Lord, talk about losing your train of thought.  I just had to reread what I've written so far because I totally forgot what I was blogging about.  Hello, Early Onset Senility?  This is Dani.  Hold my calls, please.)

My plan yesterday was to go one place, then another, then turn around and go home and go back to bed.

And the aforementioned truckers.

And I wasn't happy about it.

It was pouring down rain and what little pavement that may at one time have existed on that road had long since dissolved into mud.  I was driving along at an alarming speed (because I wanted to get out of there as fast as possible and let's face it, there wasn't exactly any traffic) when I came up behind a tractor trailer being driven at approximately 15 mph less than the posted speed limit.

I'm not gonna lie, nothing irritates me more.  If you can't drive the posted speed limit, pull your ass over so that those of us who CAN, can get where we need to go in a timely manner.  Am I right?

Of course I am.

Meanwhile, the truck in front of me was kicking back so much mud that even with my windshield wipers going at top speed, I couldn't see shit.

Every time I tried to pass, he'd speed up and drive down the middle of the road.

When I'd slow down to get far enough behind him that his mud wasn't covering my windshield, he'd slow down.

On the sections of road not covered with mud, he'd cruise over to the shoulder to create some.

In my mind, I could picture him laughing maniacally as he plotted his next move.

I ran out of wiper fluid.

Which pissed me off.

And set off a deep and disturbing bout of Road Rage.

With limited visibility, I stepped on the gas and began to haul ASS around Mr. Douchebag McTrucker.  And as I was rounding the curve and getting ready to move into the lane in front of him, I saw it: 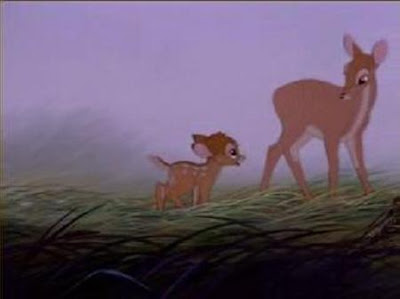 I braked so hard I gave myself whip-lash.

Mom and baby bounded off into the safety of the trees, the truck kept going, and I died a thousand times.

And then it hit me:

At the moment of my death, my last words on this earth were "Motherfucker."

Had things ended just slightly differently, I would have careened into Heaven bellowing, "Motherfucker!"

My first words to St. Peter would be, "Motherfucker."