If you're new to my blog, let me preface my tale by explaining that my husband, Dan, has Asperger's Syndrome, which is a form of Autism. (And which I also pronounce "Ass Burgers" because, you know... he's an ass.) He gets very fixated on certain things, has zero empathy, and has HUGE issues with "random blurting." He also is completely lacking a filter and tends to say things that make me want to kill him (which I then channel into prolonged viewings of Deadly Women and Snapped!).
ANYWAY.
I've been simmering with annoyance all day today after the conversation we had last night. Fortunately for him, he is at a football game this evening, thus unwittingly sparing himself a massive verbal bitch-slapping because yeah... I'M NOT OVER IT YET.
And what would make it worse is that he probably has zero idea of why I'm so pissed at him.
Here's what happened:
Dan's mother's birthday is today. I reminded him last night, because apparently that's my job, and Dan has it in his head that it's somewhere in our marriage vows that all important events will be remembered and dealt with exclusively by me. He has absolved himself of all responsibility and goes blithely through life, completely unconcerned by trivial details like his own mother's birthday. (And his niece's and nephew's birthdays, his dad's birthday, MY birthday...)
Remarkably, however, he never forgets his own.
SO.
Last night, after I reminded him, he said, "What are you going to do about it?"
Right? RIGHT?
Me: *because really, expressing annoyance would be pointless* "I thought I would make dinner for her and your dad and the kids and we could take it to them on Friday, when your dad's home?"
Dan: "What would you make?"
Me: "I'm going to make lasagna, salad, garlic bread, apple pie, and Sangria."
Dan: "What if she doesn't like that?"
REALLY? 'WHAT IF SHE DOESN'T LIKE THAT'?? Then she'll freaking eat it anyway because it's a gift, right?
Which is exactly what I said. I also may or may not have included questionable language and a look of incredulity.
Dan: *absolutely stuck on this one detail* "But how do you know she likes that?"
Me: "Does she like lasagna, Dan?"
Dan: "Yes."
Me: "Does she like garlic bread, salad, and apple pie?"
Dan: "Yes."
Me: "Does she like wine?"
Dan: "Yes."
Me: "THEN WHICH FREAKING PART IS SHE NOT GOING TO LIKE?"
Dan:
Me: *steam coming out of my ears... he can literally piss me off in 2.2 seconds without even trying*
Dan: *chugging right along, completely unaware of how close he is to being strangled by his own tongue* "What are we going to give her?"
Me: "We? Who the hell is WE? I'M making her dinner. And I'm letting YOU take partial credit for it by having the good sense to marry me. And I'm also going to knit her a shrug."
Yeah... should have quit when I was ahead.
Dan: "A what?"
Me: "A shrug."
Dan:
Me:
Dan:
Me: "A shrug. It's like a shawl, only it just goes around the shoulders. To keep your back and shoulders warm. "
Dan: "Why would she want that?"
Seriously?
Me: "Because she's cold all the time and it's going to be like 40 below in a few months and she lives in a freaking 200 year old house and I'M REALLY SUPER THOUGHTFUL LIKE THAT? What are YOU going to give her?"
Dan: "But how do you know she'll like it? I've never seen her have anything like that."
Me: "WHICH IS WHY I'M MAKING HER ONE, DAN... BECAUSE SHE DOESN'T HAVE ONE!"
Dan: *doggedly beating that dead horse* "But how do you know she'll like it?"
Me: "How do you know anyone is going to like A GIFT that you give them? You just HOPE they like it. It's a GIFT."
Dan: *wait for it... wait for it...* "Want me to call and ask her if she wants it?"
So help me Jesus if I'm not swept up in the Rapture on the 21st for allowing this man to live to see daylight, someone is going to hear about it.
Dear God,
While I appreciate the Karmic Lessons of putting up with Dan and his mouth in this lifetime, I'm pretty sure I've made up for whatever terrible atrocities I committed in any previous existences by the mere act of not killing him yet. Please note that the only blood that was shed on the evening of October the 10th, 2011, was the tiny vein that popped in my head while he was talking. I'm hoping that this makes up for the time I accidentally dropped my ex-husband's dinner on the floor and the dog licked it but I put it back on his plate and served it to him anyway.
Your humble servant,
Dani 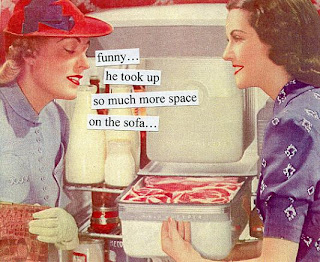