So apparently, I died.

I received this message in my inbox this morning:

Hey Dani,
We noticed that you haven’t engaged with any email from us in the last 6 months.
So what we want to know is....are you still alive? ;)

If yes but you want us to leave you alone then...
>>> Click Here to Unsubscribe
You wont receive an email from us again.
If no then you wont be reading this email anyway, so we wont expect a reply.
But it does make us sad.


Imagine my surprise to find out, via email, that I'm deceased!


Then I was kind of offended, because really, God?  Email?  The Angel of Death was too busy to make a house call? 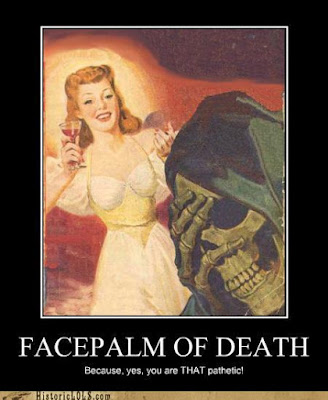 It does, however, answer a lot of questions that I've had about the events of the past few months.

1.  There was hardly any snow this winter.  Which is kind of cliche, what with the whole "not a snowball's chance in Hell" thing.

2.  All that Rapture nonsense... It actually happened, but I didn't know because I wasn't Raptured.  Because I'm in Hell.  How dumb do I feel now?


4.  Nigel Barker and the Jays were fired from America's Next Top Model.  That, in and of itself, should have been my first clue.

5.  And finally, the biggest sign of all:  My Kindle died this morning.  Because you can't charge your Kindle in Hell.


I'm sure there's more, but that's enough for now.


The facts are in: 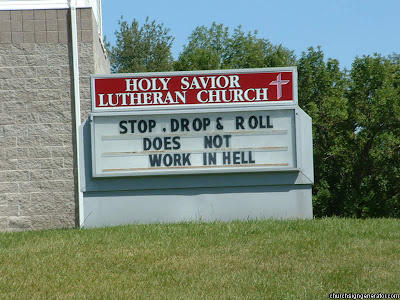 It's kind of like, when you think you're dying and someone finally confirms it and you're all, "See?  I told you I was sick!"  Or when you have a massive panic attack every time you're faced with getting on an airplane because you know for a fact that this giant metal object can't possibly stay airborne with your fat ass on board and then the sucker goes down and as you're plummeting to earth you turn to your husband and say, "See?  SEE?  I TOLD YOU THIS WOULD HAPPEN!"

This is like the ultimate "I told you so!"

I told you my life sucked!!


However, now that I know I'm in Hell, it's kind of awesome, because all of my friends are here with me, just like ACDC promised 30 years ago.  "My friends are gonna be there, toooo..."


5.  I no longer have to worry about going to Hell, because I'm already there.


Uh oh... I just realized something:

Pat Robertson, Newt Gingrich, and Rush Limbaugh are all here with me.


That's kind of the point.