Lately, I've been feeling like I'm wandering aimlessly through life with spinach stuck between my teeth and a giant KICK ME sign on my back.

Yesterday was one of those days that proved, without a shadow of a doubt, that my destiny was not planned by the stars, but rather by a sadistic little troll with a hideous sense of humor.

A monkey could do this.

Dan's work.  Hand over my car to have tires changed (because yes, I'm still driving around with my snow tires on because my husband, who is an automotive technician and works at a freaking dealership, "hasn't had time" to change MY tires) and pick up a loaner.

A breeze, it was.

I climb into the anonymous, temporary car, collect my husband, and hit the Mongolian Grill Asian Buffet for lunch.

And here's where it started to go bad. 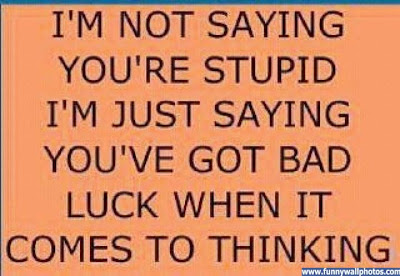 I'm not a giant fan of buffets.  Of any variety.  (Please don't kick me out of the Fat Girl Club... please?  It's nothing personal... I just get skeeved out by the thought of millions of people breathing on my food.  Sneeze guard be damned... I once was in line at the salad bar and watched a person ahead of me USE HIS HANDS to serve his lettuce, and then PUT SOME BACK BECAUSE HE TOOK TOO MUCH.)

(Also?  What is this trend of overly-permissive parents allowing their small children to serve themselves at the buffet?  Let them trail along side of you and point to what they want but come on... they lean in, breathe on the food, cough, sneeze... and, um, in case you didn't notice?  THE SNEEZE GUARD DOESN'T COME DOWN THAT LOW.  Your child may be precious in YOUR eyes, but I personally don't want their little mutant germs.  And since they aren't mine, there's a pretty good chance that I don't find them all that adorable.  No offense.)

So anyway, we went to the Asian Buffet for lunch because Dan loves nothing more than a buffet.  As previously stated, me?  Not so much.

He had half an hour for lunch.  Basically, it takes me that long to circle the place, find something I might like (I'm not a giant fan of Asian food, sorry), wait for them to add fresh stuff to it so I'm not scooping up other people's backwash, inspect it carefully when I sit down, looking for stray hairs or random ick, and then tentatively eat it until I gross myself out enough that I can't finish it.  (I'm a pain in the ass at buffets.  I really am.  That's when my OCD rears it's ugly head and makes me look like a freak.)  I managed to come up with a plate with a smattering of three different items on it within the time it took Dan to make two trips, and then I nibbled for 5 seconds while he said repeatedly, "Are you gonna eat that?  I need to get going.  Are you done?  I need to get going.  Are you finished?  Are you finished?  I need to get back to work."

I was given the bum's rush out of the restaurant, took Dan back to work and dropped him off, (where he proceeded to chat with his co-workers for a good 10 minutes in the parking lot before heading inside... apparently it's okay if he's late as long as he's on the premises)  and I drove my hungry self the 15 miles to the DMV to take care of business.

Except the road leading to the DMV was closed.


I do not know my way around the town (village?  WTF ever) that the DMV is in.  I know how to get there because I turn right at Pizza Hut and it's about half a mile down that road.

The road to Pizza Hut was closed.


I continued aimlessly down the highway, looking for a freaking detour sign.

I found one pointing into a gas station.

I turned in, to see if there was a hidden road somewhere around, or maybe even a wardrobe that opened into Narnia, with a pit stop at the DMV.

I went into the gas station and said, "How can I get to the DMV?"

They directed me back to the road that is closed.

Which, in case you were wondering, is no fucking help at all. 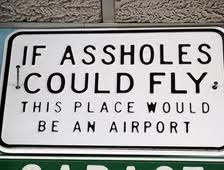 I gave up on the whole DMV thang and headed to Walmart to do my shopping.

First stop at the Walmart:  Turn in Dan's prescription.

Second stop at the Walmart:  The bathroom.

Which is where I noticed the gianormous blob of sticky brown sauce from the chicken I'd scarfed down at the Asian Buffet dripping happily down my chin.

Two of it's sisters were dripping down my chest.

This wouldn't have been nearly so awkward if I hadn't spent five minutes flirting shamelessly and coquettishly with the morons at the gas station when I was trying to appear helpless and Damsel-In-Distressish while asking how to get to the DMV.

As the icing on the cake, I did the mandatory teeth check in the bathroom mirror, when what to my wondering eye should appear but a thin, green strand of cabbage from the one damn bite of eggroll that I took, glued to my front tooth.


Just to be safe, I made sure I hadn't started my period (I mean, seriously... why not?  The one thing that would have made my dripped on, green toothed ensemble complete is an enormous blood stain the size of a salad plate on my rear end, no?) and went about my shopping, pretending I was a different person than the pathetic human who was dressed just like me who entered the store earlier and turned in a prescription.

(I kind of wanted to go back to the pharmacy and say, "Did you see my fatter, older twin in here earlier?  She's such a mess... all we can do is love her the way she is.")

Long story short, my shopping was pretty much completed without incident and I headed out to the parking lot to load up my shit, steal one of my husband's Xanax, and go home.

And then it happened...

I couldn't remember what the car looked like that I drove there.


I was totally not paying attention when I got in it.


Also?  I couldn't remember where I parked.


My Lean Cuisines melted as my panic set in, while I wandered frantically from car to car, clicking the key fob to see if a door would unlock.

After 10 minutes of stupidly and pointlessly pushing pushing buttons in front of light colored sedans that didn't belong to me, I finally found a Buick LeSabre that answered the siren song of the key fob and unlocked when I pressed the open door key.

(Oh yeah... It's the one with the dealer plates from the dealership Dan works at slapped on the back.  Duh.  Also?  I parked next to the shopping cart thingy so I wouldn't have to walk too far to put my cart away.  Heh heh.  I forgot.)

And then I couldn't figure out how to open the damn trunk.

I pulled, I lifted, I looked to see if I could find a latch...


I unloaded my purchases into the back seat and drove home, fuming.

I stopped at the dealership to inform Dan indignantly that the trunk doesn't work.


Who opens a trunk with a key anymore??? OMG, Buick... get with the damn program!!!  Have an open trunk button on your keyfob like everyone else!!


Dan:  "Didn't you see the trunk button on the keyfob?"

You know those times when there is literally no way to prevent yourself from looking stupid?

This was one of those times.

In other news, today is my beautiful son Shea's 26th birthday.  Happiest of birthdays to my most precious oldest child!!

I'll love you forever,
I'll like you for always,
As long as I'm living
My baby you'll be.