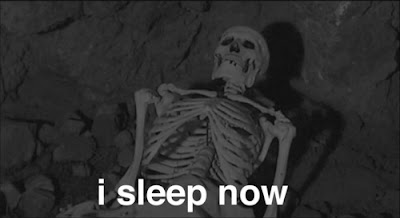 To those of you who close your eyes and fall asleep, just like that, you're doing it wrong.

You're supposed to lie awake half the night and try to solve all the problems of the Universe.  Duh.

Also?  I really fucking hate you.

Never in my life have I peacefully, blissfully, and quickly fallen asleep.  Never.

The only time I can actually remember rapidly falling asleep was shortly after I gave birth to my first child.  I had been in labor for five days, hadn't slept for five days, and after they finally pried my son, Shea, out of my womb (where he obviously planned to spend Eternity), they brought me something other than ice chips to chew on.  I took one sip out of my glass of water and passed out cold.  I woke up 8 seconds later when I dropped the cup onto my chest.

(The icy water dripping down my neck may or may not have had something to do with that.)

I haven't fallen asleep since.

It doesn't matter how tired I am, how long I've been awake, how hard I've worked... the second my head hits the pillow, random thoughts begin floating through my brain and I have a night-long dialogue with myself that simply doesn't end.

My brain can't shut up.

This is a true account of what kept me awake last night.  (Prepare to be amazed.)

I dragged my sad, sorry, and tired ass to bed at around 10:30 because I literally could not keep my eyes open.  (Literally.  Yes, literally.  I was reading a book and my eyes kept drifting out of focus and closing on their own accord.)

I snuggled under the covers, made room for Maisy (Dan has to fend for himself), mumbled something to Dan about good night, love you, blah blah blah, sighed blissfully, and then had a realization:

My feet kind of hurt. Probably from wearing high heeled flip flops all day.  If I lopped off my toes, would I still be able to walk?  I wonder if people can walk toeless. They hurt where my toes are.  Asian girls who had their feet all swaddled have no toes, and they walk.  Kind of.  What's it called, when they wrap up Asian girls feet and their toes fall off?  Swindling?

No, that doesn't sound right either.

What was that book I read in 6th grade, something about lanterns... It had that Chinese girl in it who was ashamed that she had big feet...

Some crappy gothic mystery writer that Mother liked to read.  Geez, she had the worst taste in books.  Veronica something.

Who wraps up the feet?

Binding!  That's what it's called!  Binding!

My feet feel like they were binded.  Bound.  Bounded.  Binded?  Whatever.

Japanese.  I'm pretty sure it's Japanese.  Crap.  I need Google.

I wonder if Dan would notice if I grabbed his lap top and Googled "foot binding."

Shit. Now I have to pee.

*2 minutes later, after getting up to pee*

House of a Thousand Lanterns!  Bingo!!!!

Who wrote that book?

Didn't she wrote that stupid book about farming for opals in Australia?

Do they farm for opals?  Dig for opals.  Something.

I wonder if this is the first sign of Alzheimer's?  Not being able to remember simple words, like "mine" and "bundle"?

What the frig was the one about Australia and opal ranching called?

Come on, Danielle... we just went over this.

I can't believe that yesterday when I was driving home I sang "Out past the cornflakes where the woods got heavy" when I was listening to Night Moves.  I need to Google the symptoms for Early Alzheimer's.

And whether Japanese or Chinese girls had their feet bundled.

I wonder if Dick Van Dyke is still alive?

It has to be Japanese, because the Geisha's had their feet bound.

Shit, it's after midnight.

"Out past the cornflakes where the woods got heavy... Out in the backseat of my 60 Chevy... Working on mysteries without any clues..."

Did I say cornflakes again? 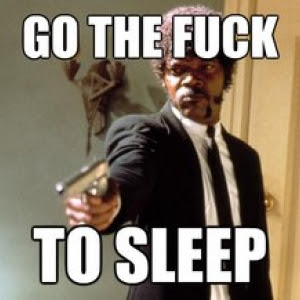 I need to Google the lyrics to Night Moves.

And Blinded By The Light.  What the fuck are they saying?  "Wrapped up like a douche is a runner in the night..."

You'd think 30 years later I'd know the words to the damn song.

I have to pee.

No, that isn't where I fell asleep.  I got up and peed again, came back to bed, and spenT the next half hour trying to remember the name of the book about the opals in Australia.

Which I Googled this morning, by the way.

It's called The Pride Of The Peacock.

Since it drove me crazy all night, the least you can do is read this shitty book on my behalf.

And foot binding is traditional in the Chinese culture, not Japanese.  I totally dropped a deuce on that one.

I was going to post a pic of it just for you, but it's kind of gross and barbaric so I didn't.

Speaking of deuces, it's "Revved up like a deuce, another runner in the night."

Now we both know.

And now I'm going to drink coffee and ponder my  next move.

(I didn't Google "Symptoms For Early Alzheimer's" because I didn't want to know.)
Posted by Unknown at 10:30 AM