Remember the time, for the past 49 years, that my New Year's Resolution was "Lose Weight"?

Yeah... I'm not doing that this year.

At first I was all, "Screw it... I'll resolve to gain 20 lbs instead.  That way I'll either be wildly successful at keeping my New Year's Resolution or else I'll be ecstatic if I DON'T keep it.  Win win, am I right?"

(Because I'm always thinking, you guys.  Always.  Also?  I'm usually right.  Don't hate... it's not something I can control.)

Then I was all, "I knowwww!  I'll eat right and work out and focus on health instead of weight loss!!"

But then I burst out laughing at myself because really, who am I kidding?

Eating right is actually not a problem for me because I know how to do it.  I can eat right like it's my JOB.  And I would totally do it if I were paid to.

Working out, on the other hand?

I know it's good for me.  I know it's what grown-ups do, whether they want to or not.  It's something people do to stay healthy, look good, live forever, never die, and post regularly on Facebook.  And trust me when I say I would LOOOVE to be able to post "Dani is at Bust Your Ass Gym working out like a rock star and showing off her six-pack abs."

(In fact, maybe I'll do it anyway, just so I can hang with the cool kids.)

Here's the thing:  I don't like getting sweaty.  I hate it when my hair gets limp and damp and I have to re-do it.  I don't like lifting heavy things.  I don't do running, unless something big and dangerous is chasing me.  (And even then I probably wouldn't run... I'd stand there and be like, "Ummm... I'm not running, so you might as well stop chasing me."  And then I'd mace the crap out of them.  BOO-YAH.)  I hate getting out of breath, hate it when my heart rate is elevated, hate being around other people who are sweating... 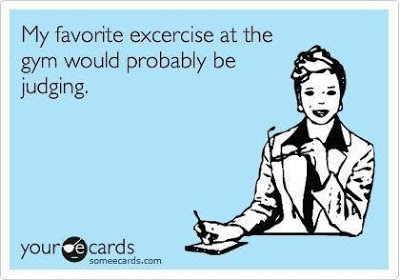 Point being, if I made a resolution to work out, I wouldn't do it.  You know it, I know it, the New Year's Resolution committee knows it...

I put the last two Good n Plentys in my mouth, washed them down with the last of my coffee, and then...

a light bulb went on over my dim sugar and caffeine filled head.

It was so bright it almost blinded me.

I looked back over the month of December and cataloged most of my meal choices.

Breakfast, almost without fail, consisted of two cups of coffee and a handful of Good n Plentys.

On the days I didn't go eat lunch with my husband, my lunch was Light Buttered Microwave Popcorn and Diet Pepsi.

On the days I DID go eat lunch with him, french fries were usually involved.

Dear Lord, don't get me started on dinner.

5 nights out of 7 I noshed on a wheel of Brie and crackers.  I'm pretty sure the only vegetables I ate appeared in the form of Spinach and Artichoke Dip.  (I have the best.recipe.EVER for that.  Actually, it's not a recipe... just something I throw together that involves a buttload of Brie, sour cream, pepperjack cheese, cream cheese, and spinach and marinated artichoke hearts.  It's to friggin' DIE FOR.  Literally, if you eat enough of it.)

In my defense, I was sick the entire month and that isn't my typical dinner menu, though breakfast and lunch have remained pretty consistent for 10 years or so.

(Okay, go ahead and judge.  I'd totally judge you if that was YOUR menu for 10 years.)

Because I can totally do that.

Then I'll move on to lunch, after I totally master dinner.

I'll tackle breakfast last, because I'm fragile in the morning.  And vulnerable.

(I remember when my son Brennan was around 5, he stayed the night at a friend's house and apparently waxed eloquent over the pancakes, eggs, and bacon he was served for breakfast.  He carried on for so long about how wonderful breakfast was that the mom asked him, "So what does your mommy make for breakfast?"  Brennan thought long and hard for a minute or so and then answered, "My mommy makes coffee."  Mother Of The Year, that was me.  Winning!!)

(I'm sorry, boys, that I made coffee for breakfast and forced you to eat Pop Tarts and cold, leftover pizza.  And once I made you eat ice cream for breakfast, because I ran out of cereal and pizza and Pop Tarts, and I figured "Ice cream has milk... that's healthy."  I suck.)

I also totally lost my train of thought.

Here's what I'm going to do:

I'm going to pretend that January 1st is just another day.

I'm going to slap myself around a little and stop eating like a 5 year old left to their own devices and eat like the intelligent, health-conscious woman that I actually am.  (Remember Macaulay Culkin in the hotel scene in Home Alone 2:  Lost In New York?  Where he's ordering ice cream and candy and pretty much nothing but crap on a stick and then winds up with a room service bill of  $967?  That's what it looks like in my head when I'm gazing longingly into the fridge and trying to come up with something to eat.)

Anyway, back to me being an intelligent, health-conscious woman...

I'm 50 years old and it's time.  Not because it's a new year, not because the date will magically change tomorrow morning from 2012 to 2013, not because at midnight tonight people all over the globe will resolve to put out their last cigarette and take their last drink and eat their last burger, but because I know I need to do it and I literally have no excuse not to.

I'm pretty sure that no one on their death bed said, "Gee... I wish I hadn't been so healthy."

(Unless, of course, I die tomorrow... in which case I'd be all, "I'm glad I had Good n Plentys for breakfast yesterday morning.")

Since I don't know when I'm going to die or from what, I guess I'd better pull my head out of my ass and stop eating like it's my last day on earth. 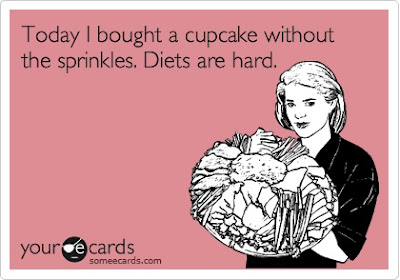 I'd like to apologize in advance for not making any resolutions this year.  I'll be back next year. 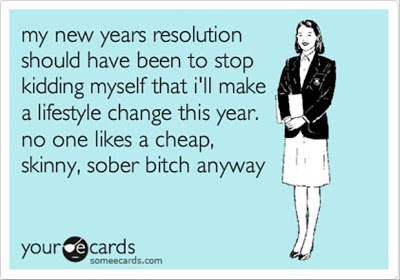