I received an email the other day from my friend, Dana, that sent me spiraling down a path littered with memories of Awkward Moments With Mom And Dad.

Oh GOD... the Awkward Moments With Mom And Dad...

I was sitting on the patio last night with my son Patrick and husband Steve when our conversation is completely drowned out by the loud moaning of a woman, probably one house over, having sex. There was NO mistaking this sound. Based on the tempo (oh crap, how do you spell rhythm?) She was getting it GOOD. "Oh God, oh shit, yes fuck me, oh God!"


We could almost hear flesh slapping against flesh. Lucky gal, this went on for about an hour. And, no. Nothing awkward about listening to that with your son. Let's see...what else can we talk about to distract us from the carnal activity over yonder? 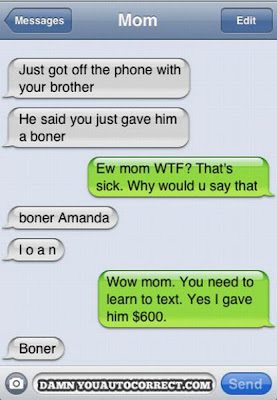 Oh, Dana... Dana, Dana...  You have no idea what deep, dark places this revelation awakened in my tortured mind, the can of worms that thou has opened...

A Day That Will Go Down In Infamy

I was 19 years old and home visiting the 'rents.  My mother had a group of Lady Friends coming over to the house for a Sewing Circle (my idea of Dante's 4th Circle Of Hell... there are worse things, but Sewing Circle is up there).  I was naturally invited to hang out (and do what?  Demonstrate how my effective use of duct tape to hem up my pants totally eliminated the need to ever thread a needle?) but I gracefully declined, citing the many reasons why I would rather stab myself in the eyes than hang out with my mother and her friends (all of whom irritated the ever loving shit out of me) and sew.

(*Sidebar:  I was an exceedingly adorable daughter.  A-freaking-dorable.  And always charming and respectful.  Always.)

My mother then took it upon herself to arrange a Father-Daughter date for my dad and me, to get us both out of her hair and also to no doubt to ensure that I would never, ever diss her Sewing Circle again.

What happened next scarred me for life.

I had no idea what our "date" would entail, as my mother planned it and presented it as a "surprise."

"Your dad is taking you to dinner and a movie tonight to spend some quality time together!  It's going to be so special!  SURPRISE!"

(Basically, this meant that I had to cancel my previously made plans of drinking myself into a stupor with my friends and making poor choices after my blood alcohol level reached 2.0.  Curses!)

My dad took me to dinner, which was awkward at best, and then took me to the theater to see the movie my mother had told him I would probably enjoy watching.

As I heard him tell the ticket person what movie he was taking me to, the hair raised up on the back of my neck and I desperately prayed for the floor to open up and swallow me, right then and there.

My dad took me to see Fast Times At Ridgemont High.

For two hours we sat silently in the theater, side by side, as Phoebe Cates demonstrated the proper way to give a blow job, Jennifer Jason Leigh lost her virginity, Judge Reinhold masturbated to the fantasy of Phoebe Cates removing her bikini top on the diving board...

That's EXACTLY the kind of thing you want to watch WITH YOUR DAD. 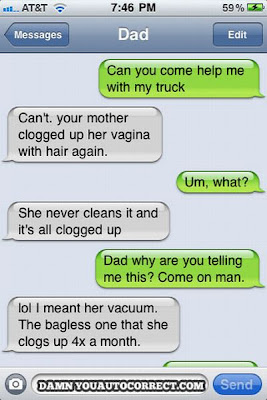 And then, there was the Exit To Eden fiasco.

(All bad things happen in Turlock, CA.  It is written.)


My parents had a bad, bad habit of going to the video rental place and grabbing movies, willy-nilly, off the rack without bothering to see what they were about.

(Don't even get me started on the time my mother came back with a movie titled "Eating Raoul."   Basically, it was a dark, dark comedy about S & M, mass murder, and cannibalism.  When asked why in the name of all that is holy she decided to rent that particular movie, she replied, "I thought it would be about France."  Ummm... why?  "Because the person's name is Raoul."  But of course.  That makes PERFECT FUCKING SENSE, DOESN'T IT?)

I was down visiting with my kids when my parents thought it would be fun to have a movie and pizza night at home.

Why why WHY did I agree?  WHYYY?


Mom ordered the pizza and sent Dad off to rent a couple movies.

Naturally, he comes home with Exit To Eden, a comedy with Rosie O'Donnell and Dan Aykroyd, in which they play undercover agents who infiltrate a Bondage and S & M Retreat.

First scene of the movie:  A little boy getting wildly aroused while he's getting spanked by his mom.

I've blacked out most of it but I can't seem to get the image of Dana Delaney letting some guy lick sugar and butter off of her nippular area out of my head.

While praying for death.

Dad's reasoning for choosing this movie:  "I thought it would be something about the Bible."


I may or may not have mentioned before that naturally, I started my period on our wedding day.


(Because, honestly... when ELSE would I start, right?)

Now, granted, getting one's period is not the terrible secret it used to be back in the day... But it's still not something one wants to Share With The Class unless it's absolutely necessary.

Anyway, the day AFTER our wedding Dan and I took his parents on a little tour of the area.  I had warned Dan prior to leaving that I was not going to hike up and down sand dunes or go foraging for berries in the wilds of Del Norte County.  I had cramps, I was bloated, I was headachey and quite frankly, barely in the mood to even sit in the freaking car.  The less I moved around, the better.

He nodded and claimed to understand and swore on his own death bed that he would not suggest anything that involved physical activity.

As we got into the car, Dan's dad asked, "So what are our plans for today?"

Dan replied, "Well, Dani's on her period and is bloated and crampy, so she doesn't want to do anything that involves walking.  How about we just take a drive?"

Dan, not to be deterred, continued, "Now ask me how my wedding night went!  Haw haw haww!" 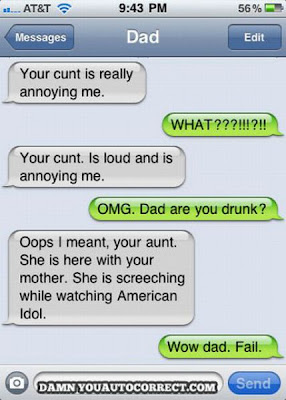 And finally, I just want to share this with you, not because it has anything to do with this blog, but because I came across it while googling for other things and I think it's hifreakingLARIOUS: 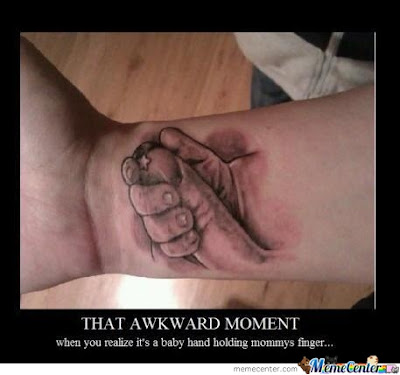 Peace out, home skillets... have a fabulous day!!  And share with me your awkward moments with parents or as parents or in lieu of parents...