Breakdown of a Breakdown 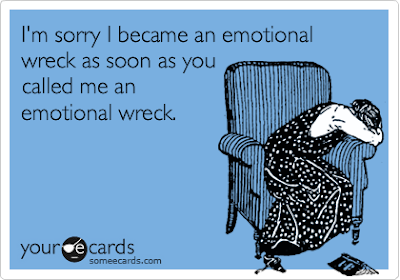 
Any person who happened to talk to me last week:  "So how is the move going?"

Me:  "I SWEAR TO GOD I CAN'T TAKE IT ANY MORE!  IF I HAVE TO SPEND ONE.MORE.DAY. PACKING UP THAT APARTMENT I AM GOING TO HAVE A TOTAL AND COMPLETE NERVOUS BREAKDOWN!"  *LOUD, UNCONTROLLABLE SOBBING, FOLLOWED BY THE SOUND OF ME MIXING A STIFF COCKTAIL*


I'm pretty sure I fulfilled my lifelong ambition of becoming a temporary alcoholic last week.


I had some amazing ideas while I was packing.  UH.MAZ.ING.  Unfortunately, I couldn't get Dan to see the amazingness of my ideas, so none of them were put into place.  However, due to their utter amazingness, I am going to share them with you, in case you ever are in a position where you need to move all your random shit out of an upstairs apartment:

Me, to Dan:  "You know what we should totally do?  Just get rid of all our stuff and buy new.  We could totally just leave it all here and let the landlord deal with it.  He can keep our security deposit... it'll pay to move all this crap out and haul it to the dump, or thrift store, or wherever.  It would be a real money saver, don't you think?  Besides, I hate this furniture,"


Me, to Dan:  "I have an idea... let's throw away all of our dishes and just use paper plates from now on.  Kill two birds with one stone:  I won't have to pack 47 boxes of glass and dinnerware and I'd never have to do dishes again!"


Me:  "How about a margarita machine?"


Me:  "Let's recruit the Amish to move our stuff for us.  They have strong backs and are used to doing hard work that sucks in 56483957 degree heat with 5638394756% humidity.  We can drink cocktails and tell them where to put everything."


Me:  "It would be fun!  I'd be all,  'Over there, Jedediah!  Don't drop that magic box that plays moving picture shows!  Pick up the speed, Hannah... I want that martini shaken, not stirred!'  Plus it would be totally PC because they aren't like slaves, they'd just be doing shit I don't want to do.  We'd pay them and stuff."


(*Sidebar:  I totally saw an Amish woman smoking while hanging out by her buggy selling fruit and vegetables.  I don't know if that's against the Amish code or anything, but I found it amusing.  I may or may not have flipped a u-turn to drive back by and see if I actually saw what I thought I saw.  I did.  Homegirl was getting her smoke on, in bonnet and sensible Amish shoes.   So I'm pretty sure they'd be okay with being my cocktail bitches while Jedediah and Mose moved my shit, yes?)


Me:  "OR... and this is just a thought... We could have like an estate sale, only in our apartment, and we wouldn't be dead.  We could just put up signs and people could come in and buy our stuff and then we'd just take the money and buy better stuff.  Then we wouldn't have to carry it all down the stairs."


Dan can be such an asshole.  He refused to take any of my suggestions into consideration.  Apparently (and this is what I read into it) he values our stuff more than he values my sanity.


In the long run, I actually didn't wind up carrying anything downstairs (I'm morally opposed to carrying anything heavier than my purse) but still, it was the thought that counted.  I knew someone would be dragging all that shit around corners and through stairwells and over and river and through the woods, and I was just thinking about them.  Dan, his brother, his dad, and his niece and nephews did 100% of the grunt work while I stressed and cleaned and discovered, at the very end of the day, that I had completely forgotten about the hall closet, where I'd shoved all my Christmas stuff the day after Christmas without bothering to box it back up.  Hundreds of ornaments, two fiber optic trees, free-flowing garland, wadded knots of lights, ribbons, bows, and strands of tinsel had worked themselves into one elaborate unholy ball of holiday cheer that needed to be untied, sorted, bubble-wrapped, and repacked.


I threatened another breakdown.


Suddenly, my idea of putting everything into trash bags and dealing with it later didn't seem so bad.


Long story short, all my Christmas crap is in trash bags. 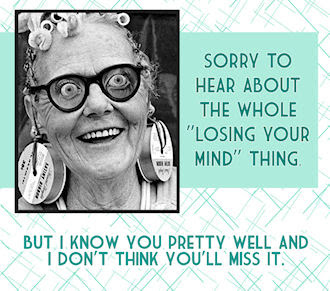