Of Michael Kors and Left-Handed Watches

While I realize that I'm at best a "little quirky" in certain areas of my life, I'm starting to be concerned that I may or may not have totally passed up quirky and am heading into straight-up "freak" status.


The fact that I can kick anyone's ass playing "Name That Serial Killer" is not only normal, it's a life skill that may or may not come in handy one day.


Scheduling my life around the new season of America's Next Top Model?  What can I say, I have my priorities straight, yo.


Eating Good n Plentys and coffee for breakfast?  Okay, that might be just a little odd, but certainly wouldn't cause anyone to do much more than raise their eyebrows and predict a dire ending of toothlessness and diabetes at some point in my life.


The mad skill of being able to identify every purebred dog breed recognized by the AKC?   ENVIABLE.  (Useless, but still kind of awesome, yes?)

Anyway, it's almost sad how long I could go on with this.  Instead, I'm going to get right to the point.

Here's where my "quirkiness" becomes "dude, you're a freak!"

It's all because of Michael Kors' belly button.

I'm obsessed with it.

I google pictures of it and look at it. 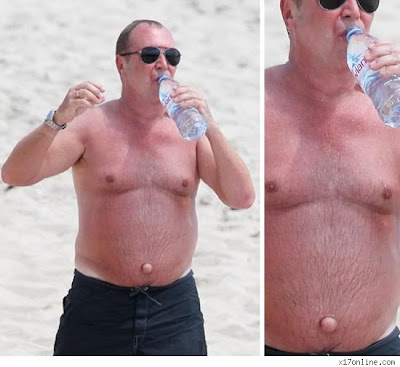 Probably because it's looking back at me.

Why do I find this so fascinating, you ask?

It's simple, really.  The first time I saw it I came up with a theory.  My theory is that in utero, Michael Kors was a twin.  A hungry twin who absorbed the other twin.

(You've heard of this, right?)

So rather than being a twin, he became a singlet (singleton?  simpleton?) while his other half wiggled and jiggled and tickled inside him.

(I had a There Was An Old Lady Who Swallowed A Fly moment.  Please ignore.)


As Michael Kors grew older, so did the absorbed twin.

Slowly but surely the twin began an escape plan.

The plan was to push himself out through Michael Kors' belly button.


Long story short, what we have here is the nose of the absorbed twin.  He figured if he could get his nose through, the rest of his head would soon follow.


If you spend as much time thinking about this as I have, it would make perfect sense.

I read somewhere (or maybe I totally made it up, which may or may not have happened) that there was a theory that all lefted handed people were once mirror image identical twins who absorbed their sibling.

This theory holds a lot of water for me because my sister is left-handed and she is totally the type who would absorb her twin.  She's not a giant fan of competition and still blames me for the fact that she is not an only child.

Also?  She had a large mole growing next to her nose that she had removed.  I'm pretty sure that was her twin, trying to make a break for it but missed the nostril by a hair.

Okay, it didn't, but that could just be because it hadn't grown any yet.


I don't know if Michael Kors is left handed or not but the fact that he makes left-handed watches raises a good deal of suspicion.