Yes, Virgina, there IS a Santa Claus

I'm getting a little worried about the whole "transvaginal mesh/vaginal sling" issue.

Those commercials are always on.  Always.  I mean, it's one thing to have a million moments of panic when one of those "Did you or a loved one take two aspirin and then die?  You may be entitled to compensation!  If you or a loved one has died after taking aspirin, call Blah Blah Blah and Associates" commercials.  I spend enough time as it is trying to remember all the medications I've been given throughout my life just in case I die suddenly and need to file a class action law suit.

I just don't have time to wonder if I've been injured by vaginal mesh or if my vaj fell out of a sling.  Who knows this shit?

Is my vaj in a sling and I just forgot? 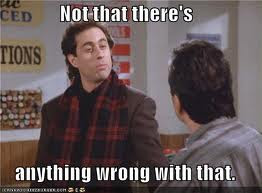 Because I could really use the money.

These ads are on so frequently that they make me nervous.  I mean, I am almost positive that my pelvic floor is pretty much where I left it the last time I used it, but I haven't checked lately.  Do I need to reinforce it?  Build a fence around it?  Put it in traction?  Reupholster?  Wrap it with an Ace bandage?

Does Michelle Bob Duggar have one? 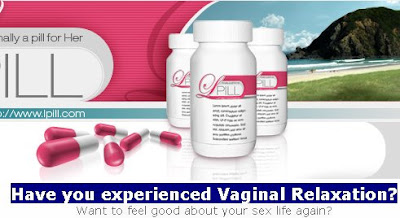 I have no idea whether or not my vajay is relaxed.

It's usually pretty chill; hanging out, smoking a cigarette, having a cocktail... (no pun intended... really)...

But is it relaxed?

Wait... Is it supposed to be relaxed?

IS MY VAGINA TOO RELAXED??

Oh, the dark places this blog is taking me...

Where is my virgina and why does it need to be tightened??

It all started when I saw the same commercial for male catheters five times during a one hour show.  Five times.  Five times.  In one hour.  And I was all like, "I had NO idea that men needing to 'cath' before they pee was even a thing."  I mean, I pee at least 400 times a day.  Not being able to pee has never been an issue.  I can pee on command.  I can pee, then be told we're getting ready to go somewhere five minutes later, and I will need to pee again before we leave and then probably at least twice on the way there and then that'll be the first thing I do after we arrive.  So I'm like, "Really?  Dudes can't pee?  Is this like a trend?"

Is "cathing" the New Black?

Then I started getting paranoid.  Because like I've mentioned before, I am a hypochondriac.  Tell me about a symptom and I will have it within hours. I was beginning to worry because at least 4 minutes had passed since I last peed and I wouldn't even know where to PUT a catheter.  It took me YEARS to figure out how to insert a tampon correctly  (I mean, I knew where to put it, just had some confusion on how to get it there.  It's not as cut and dried as you might think.) ... I know for a fact I wouldn't have YEARS to figure out a catheter.  I always figured I'd die due to something butt-related and embarrassing, but dying because I can't pee?  That would suck.  Hard.

So I googled "reasons why men can't pee."

Apparently, it's usually because of the prostate.

Which I don't have.

Thank God.  I can pee in peace now.

And then I made a hideous mistake:

Word to the wise:  Don't Google that shit.

On some of the pictures I was all, "WTF is that?"  And then on others I was all, "Oh sweet Jesus, Mary and Joseph... is that what I think it is?" and "Steak sounds good..."  And in one I was all, "I had NO idea my asshole was that close to my vagina."

(I mean it's really close.  REALLYYYY close.  Like right freaking there.  Which may or may not explain some isolated incidents throughout my life.  *cough*)

I've never been one of those women who examined my private parts with a hand mirror and then named them, which could be why I'm a little vague on the proximity of everything.  I mean, I know where things are and where things go and the utilitarian purposes of it all, but I have no desire to come face to face with it.

In fact, when I was giving birth the first time and the nurse put up a three way mirror so I could watch the whole thing, I screamed like a crazy woman and ordered them to "take it awayyyyy!"    Some things are better left unseen.

(No offense to my beautiful children, none of whom are reading this, I'm sure.  And if they were, they stopped as soon as they saw the word "vagina."  I guarantee it.)

As for vaginal mesh, why, it could be anything.  Because I refuse to Google it.


I'm picturing something like a window screen, only for the vaj.  I'm not sure why a vaj would need a window screen (To deter mosquitoes and other flying pests?  To prevent robbery?  To filter out leaves, twigs, and other debris?) and I don't really want to know. 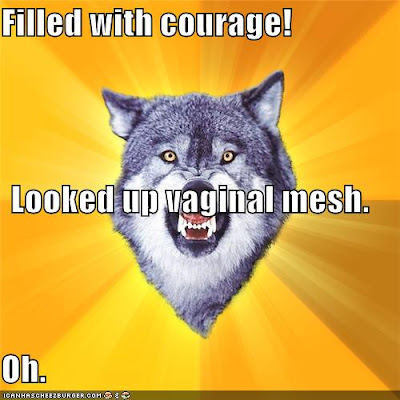