While waiting for Inspiration...

After basically having no sleep for 5 days (no, thank YOU, Insomnia!!) my brain has officially quit on me. When I say I don't have a single original thought in my head, I'm actually not being quite truthful: The truth is, I don't have ANY thoughts in my head. Not one. Zip. Zero. Goose egg.
I've been sitting here for about an hour staring stupidly at my empty New Post page, waiting on Inspiration. Well, it just called and said, "Ummm, Danielle? Remember the time we were supposed to get together and hang out and do lunch? Yeahhh... about that... Not gonna happen. Later!"
Inspiration is a real asshole. Just sayin'.
So instead, I'm going to leave you with a picture of my youngest son, Brennan. This was sent to me on Sunday, while he was getting ready to watch the Vikings play. Brennan was born in California, grew up in California, and yet, for some reason, named his dog "Minnesota" when he was 7 and became an avid Vikings fan shortly there-after. We don't quite know why. There are no Norsemen in my family, or his father's family, or anywhere on the family tree. Not one.
Until now. 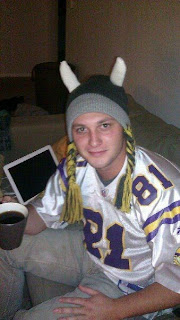 Don't hate him because he's beautiful.
Posted by Unknown at 2:44 PM