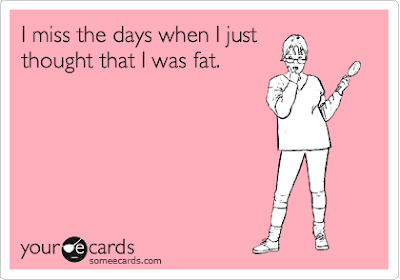 It's no secret (even though I really, reallyyyy wish it was) that I've porked out  considerably since moving to New York.  My clothes don't fit, my skin doesn't fit, I don't fit... it sucks beyond all possible comprehension of suckiness to say "I have nothing to wear" and actually have it be true. 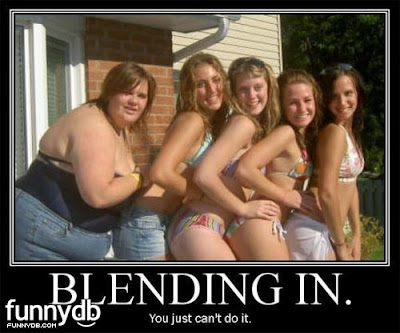 I am currently sporting the Muffin Top From Hell that even my Spanx can't control because I actually have someplace I need to be this afternoon and showing up in capri leggings and a too-small t-shirt would land me smack dab in an episode of Weekly Whacked, thank you very much Misty's Laws.  (I now fear people with camera phones.  Because ya nevah know.)

So I'm wearing a pair of real pants (because leggings just simply are not pants) that fit me last summer, but this summer?

I actually had to lie down on the bed, suck in my stomach, hold my breath, and yank up the zipper before I passed out from lack of oxygen.

I broke a nail, because the zipper was determined to not put itself through that trauma.

I then had to roll off the bed and onto the floor, because there was literally no way in HELL I could sit myself upright without causing severe damage to my internal organs. 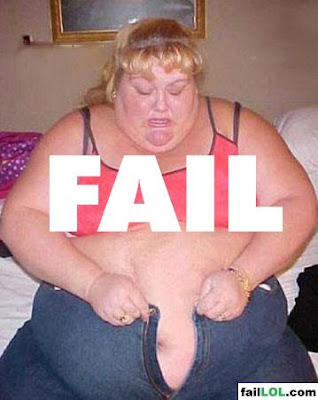 This opened up a whole new can of difficulty, because then I had to hunt down a shirt that would serve three purposes:

2.  Not be in the sweatshirt family, because it's a thousand degrees right now.

3.  Be long enough to hide the evidence if my zipper explodes.

That's a talllll order for a single shirt.


(Don't even get me started on the job my bra has been needing to perform lately.)


The thing with Fat Days is that they leave me exhausted.  I have to spend an entire day dragging my fatness from Point A to Point B, wearing Fat Clothes, fixing my Fat Hair, putting make-up on my Fat Face, and wanting to insert the word "Fat" into every sentence.

Inside my head, my Fat Song is playing...

Hello Fatness, my old friend...
I've come to feed you yet again...

(My apologies to Simon and Garfunkel, neither of whom were fat, the bastards.)


Dan will call with a request, such as "Can you please run to the store and pick me up some deoderant?" and I'll respond with, "I can't."  Dan will then ask, "Why not?" and I have to say, "Because I'm Fat."


Then we have this conversation:

Dan:  "So why don't you get some exercise?  It'll make you feel better." 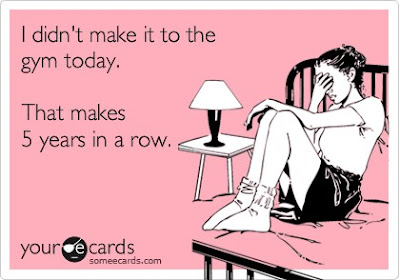 (The sad thing is, this is a totally true story.)

The bottom line is that I'm currently sitting on the couch without my pants on, waiting until the second that I absolutely have to leave the house to put them on so that I don't die from organ failure.  (I have no idea what organs can fail because your pants are too tight, due to Extreme Fatness, but I'm sure there must be at least one.  Like, perhaps my uterus will spontaneously combust or my bladder will cease to function.  You never know.  I can't be Fat AND uterus-less AND bladder-less, because that would suck.)

I'm FAT, so I need to stop at Dairy Queen after my job interview and reward myself with a Confetti Cake Blizzard for squeezing into my too-tight pants and zipper-exploding-covering shirt, because it was hard and it made me cry.  And then I need to come home, put on my sweat pants, and eat it.

And order pizza for dinner.

(You have no idea how much I wish this last part wasn't true.) 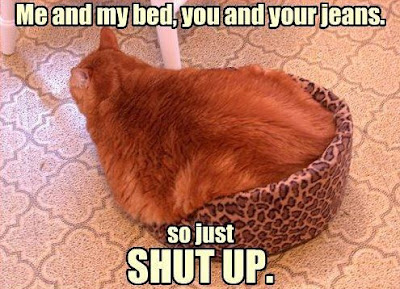