The Fairest In The Land

It's official:  I am no longer the fattest person on the block.

Praise Jesus and pass the butter, y'all.

A few days ago a moving truck pulled up to the brick house across the street from me.  I casually watched the comings and goings while Maisy barked warnings of murder, mayhem, and the Zombie Apocalypse for 8 hours straight.  When they were finished, she quit barking and I promptly forgot about the whole "new neighbors" thing (since I'd never met the old neighbors) and went about my life.

And then, it happened:

I was casually hanging out waiting for the dogs to pee or poop or both while they frolicked around the yard and ate grass, when out of the corner of my eye, I watched the new residents pull up to the house in their truck and climb out.

And what to my wondering eyes should appear but...

A Fat Girl wearing short shorts climbed out of the truck and ambled up to the front door of  the house, smoking her cigarette and chugging soda out of her large McDonald's cup.  (At least, I'm assuming soda... unless she's an iced tea kind of girl, which somehow I doubt.)

(I'm sure most of you are now scratching your heads and wondering what the hell is wrong with me that I'd be ecstatic over the appearance of someone fatter than me, so let me explain.) 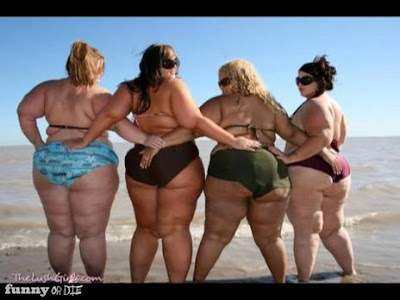 Even in the world of Fatties, you never want to be the fattest one.

If I were a member of the above group of heifers, I would want to be the second one from the left, in the black bathing suit with the good tan.

You can tell that she KNOWS she's the hot one, just by the come-hither look she's tossing over her shoulder.
She's all, "Yeah, I look like a line-backer, but check out the cellulite on THESE porkers!"

I'm almost 50, I'm short, I'm chunky, I'm losing the war with gravity... I can't compete with the skinny young hard bodies that I see prancing up and down my street walking their dogs, even though their hairstyles are 10 years out of date and their clothes are hideous.

But plunk me down next to a badly dressed fatty?

When I joined Weight Watchers 7 years ago and started lurking and posting on the message boards, I became aware that there was a Hierarchy of Fatties.

You had the Queen Fatties:  The girls who were charter members of the Such a Pretty Face Club.  Those girls banded together, formed their own Mean Fat Society, and held a Reign of Terror over the more plain fatties.

Above the Queen Fatties were the few and far between Don't Give a Shit Fatties:  The ones who didn't let their weight and insecurities dictate how they felt about themselves and didn't tolerate the bullshit of the Queen Fatties.

(Much fighting and backstabbing ensued between the two.)

Down at the bottom were the Plain Fatties:  These girls were fat all through their lives and didn't even have Such a Pretty Face to rely on.  They groveled at the feet of the Fatty Queens and the Don't Give a Shit Fatties, offering obsequious compliments and LoL's and were their staunchest supporters, just for a random pat on the head and some acknowledgment that they were, indeed, occasionally worthy.

I personally hovered between the Don't Give a Shit Fatties and the Queen Fatties, because sadly, I don't usually give a shit what people think about me and I'm quite adept at being a Mean Girl.  I'm not proud of it, but there ya go.

And let's face it, homely fatties are a sad, sad group.  Sometimes you just need to kick them when they're hovering down around your ass area blowing kisses.

The Queen Fatties and the Don't Give a Shit Fatties could say pretty much anything and the Plain Fatties would be bobbing and curtsying and agreeing with every word, proving that no matter what land you're in, if you're the fairest, you're going to get your ass kissed.

Pretty is it's own reward.

Anyway, my narcissism dictates that I can't be the fattest, ugliest girl on the block.  If I am, I will be forced to recruit fatter, uglier girls than I am to live next door to me, just so that I look better.  (Failing that, Dan and I will just have to scout out a fatter, uglier neighborhood.)

I don't have to do that now, thanks to my new neighbor, who thoughtfully ate herself up to approximately 300 lbs, just so that I would feel thin and cute while standing next to her.

Some people are givers, you know?

Meanwhile, let me leave you with this: