Fatty Gets A Clue

After a long weekend of pina coladas, barbecue, and Olive Garden, I'm once again sucking in my stomach to button my Fat Pants and trying not to picture myself riding on a Motorized Scooter for Fatties because the distance between my couch and the toilet is getting too far to walk.

As I was gearing up to give myself a pep talk about how "You're not THAT fat... yet..." the commercial for Lipozene suddenly appeared on my tv.  (You know, the one where the blonde woman comes on and asks, "Are you... overweight?" with the same look of disgust and shocked tone one would use while asking, "Did you... fart?") 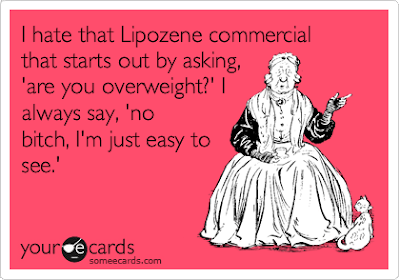 She then follows that delicate question by asking if you've considered "drastic measures" to lose weight, like liposuction or surgery.

Then she talks about the horrors of being 20 lbs overweight... or even more.

And I'm all, in my head, thinking "Oh dear Lord... not 20 lbs or more!!  Surely NO one is MORE than 20 lbs overweight because that would be ghastly and practically unheard of!!"

I ended that conversation in my head with, "You stupid bitch."  (Her, not me.)

Then an angry former fatty comes on and speaks heatedly about how you "CAN'T do it by yourself, you just CAN'T"  and encourages everyone to "order the pills NOW.  Don't wait, don't try dieting, don't try exercise, just pick up the phone and call!!!"  You won't have to change your eating habits, you don't have to exercise, all you have to do is take this pill.

She's so pissed off while she's issuing these instructions that I feel kind of scared, like if I don't shove fat burning chemical into my body, she's going to show up and kick my ass.

Which I kind of hope she will, because I have a few before and after photos to show her, of how I not only CAN, but DID do it myself.

I know I post a lot of humorous photos on my blog and make horrible comments about People of Walmart and spend a great deal of time making fun of fatties.  Some people find me horribly insensitive, mean, or even hypocritical...

Because I used to be really, really fat.

Even more than 20 lbs overweight.

In Real Life, at one time I was 100 lbs overweight.  Between depression, frustration, fear, and inability to change certain really terrible things that had happened in my life, as an adult and after I had kids, I ate my way up the scale to the point where the Lipozene Lady would have most likely dragged my fat ass out to pasture and just had me shot.

Instead, I put my fat ass on a healthy weight loss plan and in two years time, I lost over 100 lbs.

By myself, Lipozene Lady.  That's right, you heard me... No surgery, no pills, no drastic measures.  It's actually as easy and as difficult as smaller portions, healthier food choices, and getting off your ass and exercising.

I kept the weight off for almost six years.  Then slowly but surely, with the stress of packing up our shit and moving from California to New York, being homesick, sad, and unemployed, I've been not-so-gradually re-fatting at the speed of light.  (Two years to  lose it, two weeks to gain it back... how the hell is THAT fair??)

Part of the time I'm really furious with myself, because I know exactly what I'm doing wrong, and yet I keep doing it.

And I also know that all the fat melting pills in the world are not going to fix my Fatty Brain or stop me from eating when I'm depressed, frustrated, scared, or so stressed I can barely stand myself.  (Which is pretty much most of the time lately.)

I don't care if a pill melts the fat out of all the food I shove into my mouth and then shoots it out my ass (Dear Alli,  This One's For You...) There is literally no part of me that wants to shit myself to death just so I can still eat a Big Mac.

I don't want to take the easy way or find a magic pill.

I actually want to change my mindset so that WHEN Life throws me a curve ball (which it will... over and over and over again) I don't eat my weight in bread.  I want to be able to say, "Dani... instead of sitting down with a cube of butter and a loaf of bread, how about you go take the dogs for a walk?  It'll actually make you feel just as good as the bread and butter does, but won't go straight to your ass" and then actually do it.  (It always sounds like such a fabulous idea in my head but I suck at the follow-through.)

ANYWAY... mixed in with all this rambling is a promise I'm making to myself today, in front of my 12 followers:

I am going to stop myself now, before it gets so out of control that I have to lose that damn 100 lbs all the fuck over again.

And all y'all are going to have to suck it up and read about it a lot, because I literally have nothing else to do other than keep you posted on my successes/failures/foodcravings/fatness/thinspirations.

(Also?  If one person says, "Nothing tastes as good as thin feels" to me, I will cut a bitch.  Trust me on that.  I have lists of things that taste way the hell better than thin feels.  Also?  I fucking hate "Fatitudes", those idiotic motivational sayings that are supposed to make me grab an apple instead of a bag of chips.  I'll grab the apple instead of the bag of chips, but I'm not going to do it happily.  Trust me on this.)

(Also?  If I wake up tomorrow morning and am missing 12 followers, I'll know why.)