The Epic Tale Of Ninja Squirrel

*Author's note:  My computer turned itself off and needed to be rebooted twice in the writing of this blog posting.  Coincidence??  I THINK NOT. 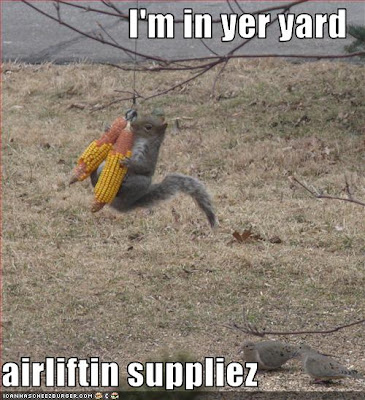 This just in:  Northern New York is being invaded by squirrels in a secret subplot in which those fluffy tailed little bastards take over the world.

I'm totally not kidding.  Take a look outside, people, and see for yourselves:

Those little terrorists are everywhere.

And they're gunning for you.  They are going to have sex with your boyfriends, knock up your daughters, eat your food, steal your internet, and mock you relentlessly from the tree tops while they do it.

Okay, maybe not, but still... if they could?  They totally would.

It's not enough that I dream about them attacking me at night, or that when I look outside, they're always there... Nibbling on something, looking adorable, laughing at me... 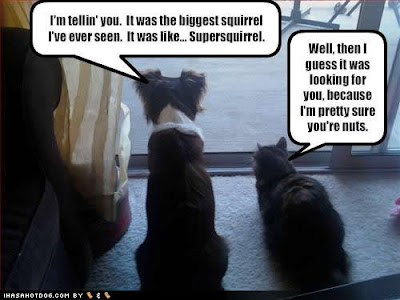 
A few days ago, Dan and I were outside watching our dogs cavort around the yard.  The trees are almost bare right now, the ground is covered with leaves... It's very Tim Burton-esque and it makes me soooo happyyyy.   All in all, autumn has been very kind this year (if you look past the whole Superstorm Sandy incident.  Which I'm not.  I'm just saying in general fall has rocked my socks off).  I'm constantly charmed by the bird life of this area... every time I see a cardinal I practically wet myself with joy.

Even though I'm a firm believer that nature belongs OUTSIDE (and I belong INSIDE) I can't help but hope that one day, a cardinal loses a feather so that I can keep it.  (One time, I saw a dead owl on the side of the road.  I was driving my kids to school and in a hurry so I decided to stop on my way home and snag a feather.  You think that's weird?  Well, here's what's even weirder:  SOMEONE ELSE BEAT ME TO IT AND THE OWL WAS GONE WHEN I CAME BACK 15 MINUTES LATER.)

(Shut up.  That's a totally valid thing to wish for.)

Anyway, I have been thrilled beyond belief this year with the changing of the leaves, the bright fall colors, the geese flying overhead (even though they still sound like turkeys to me... at least I've only commented once or twice this year about hearing the turkeys fly south for the winter).  We even had a herd of wild turkeys sauntering through our yard.  (It was awesome.)  This is truly my favorite time of year.  The hideousness of east coast summers has made me even more thankful for the glorious cooling of autumn and all it's trimmings.

So Dan and I were outside enjoying the brisk fall sunshine while the dogs cavorted through the leaves.  Nonchalantly, Dan pointed upward to the branches of a leafless tree and said casually, "Cool... you can see the squirrels running around up there."


I glanced up nervously and saw...

Dan:  *giving me the look he gives me when I say something that is apparently so stupid that it embarrasses him to even know me*  "Dani, they're right there."

Of course they are.

Throughout the afternoon I would occasionally glance up at the trees, expecting to see squirrels wearing frilly little aprons, nibbling on acorns, and living their happy little lives amongst the branches, only to see...

A trickle of anxiety nestled itself in the back of my neck and I began to avoid getting too close to the trees.

You know, just in case a squirrel fell on me.


Dan:  "Oh for God's sake, Dani!  Squirrels don't fall out of trees and land on people!  Pull your head out of your ass!"

But still, I remained cautious.

Because here's one of those things I know with absolute certainty:  If a squirrel fell on me, I would freaking die.

Being me, as soon as the day passed and I was safely indoors, I promptly forgot about the squirrel threat and went about my business.


As we were watching tv a short time later, Dan pointed to the front porch and said, "Oh how cute!  Look at that!" 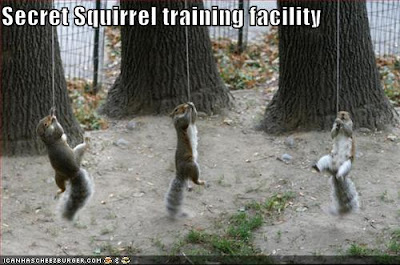 And right that minute, somewhere, in the distance the faint sound of squirrel laughter floated through the evening air.

*cue sound of obnoxious manly laughter because men never stop thinking that farts are the funniest thing in the world, bar none*

I know for a fact those little bastards were laughing at me.


I made a mental note to be ever alert to the presence of squirrels.  Because they're sneaky.


The following day I was hanging out in the yard with the dogs.  Maisy was snorting through the leaves like a little truffle pig, Javi was peeing on every blade of grass he came across, and I was absent-mindedly standing under a tree watching a chickadee bounce from branch to branch and thinking about absolutely nothing.


This is what the inside of my head looked like at precisely that moment: 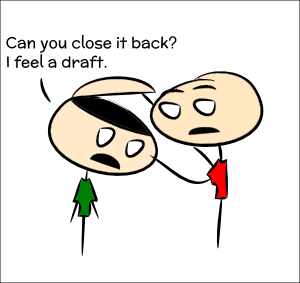 And that's when it happened.


Suddenly, without any warning, a squirrel came plummeting out of the trees and sailed past my line of vision about four inches away from my nose.


I inhaled so hard I choked on my tongue.


My natural reaction, when something falls from the sky, is to start beating myself on the head because my fear of things landing in my hair is legendary.


(I may or may not have beaten a baby bird to death one time when it fell out of the nest and landed on my head.  I've also killed a leaf a time or two for impersonating a bat landing on my head.  Bottom line?  STAY THE FUCK AWAY FROM THE TOP OF MY HEAD.)


As I stood there panting and hyper-ventilating and slapping myself stupid, the squirrel air-lifted itself off the ground and scampered back up the tree, where it high-fived it's cronies and laughed itself into a pants-wetting asthma attack.


My dogs didn't even pause in their individual pursuits for grass to pee on and leaves to look under to protect me from a squirrel invasion.

Apparently the squirrels have been intimidating my dogs.


Either that or paying them off.  I can totally see Javi accepting a bribe and then strong arming Maisy into going along with it. 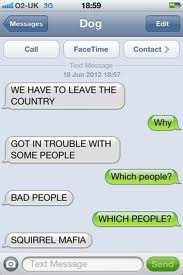 
And now YOU know. 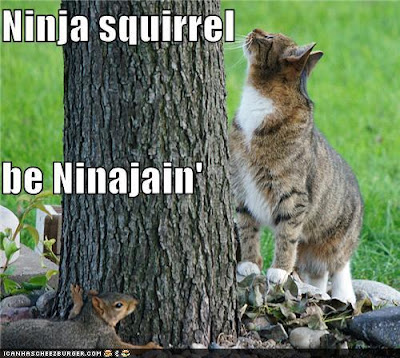